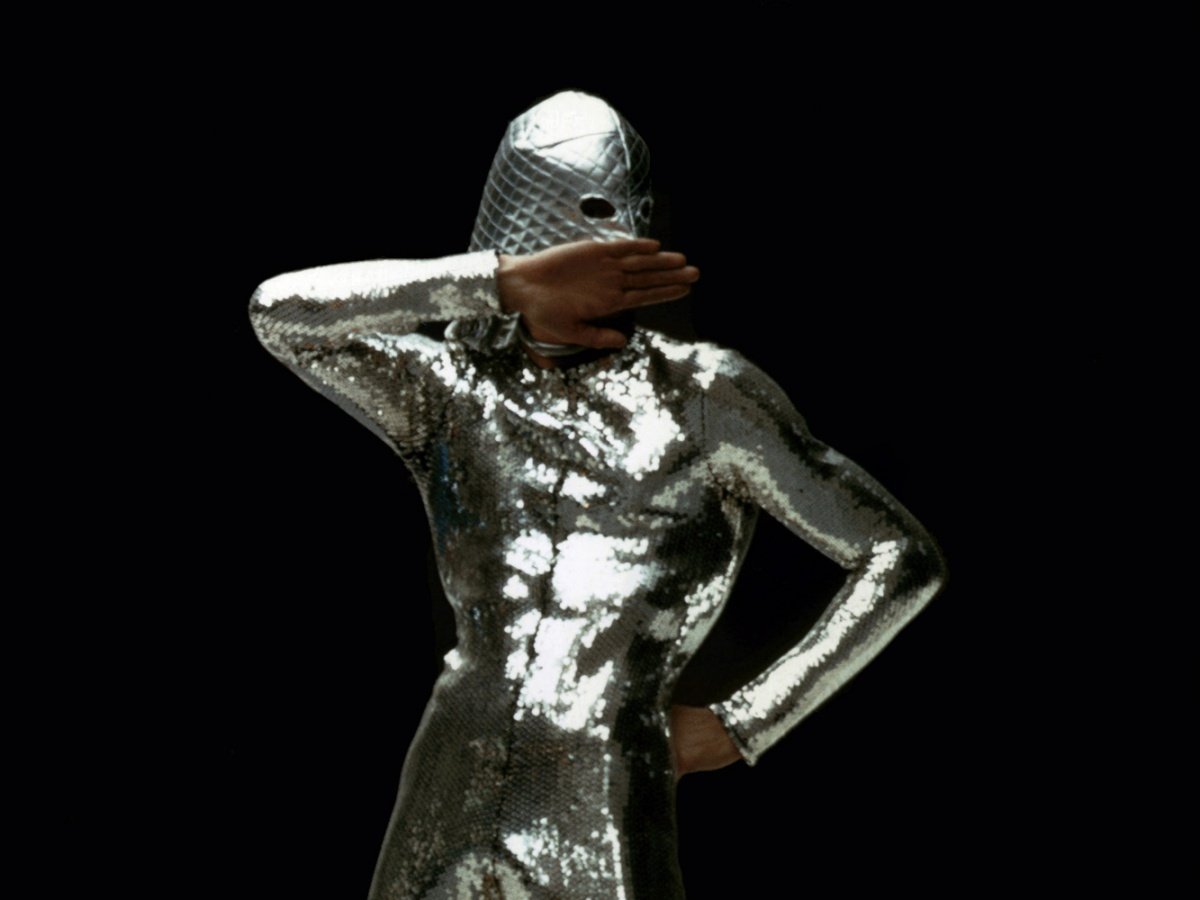 While managing the art collection of the famed theater director Robert Wilson in the early 2000s, Kentucky-born artist Scott Rollins discovered a striking photo of a man wearing a full-body fishnet suit, a long black cape, and a BDSM-style leather mask. Curious about who the figure was, Rollins contacted Noah Khoshbin, the chief curator of Wilson’s private art collection and curator at The Watermill Center, the Long Island arts center established by Wilson in 1992. Khoshbin told Rollins the man was Richard Gallo, an actor, performance artist, and theater director who had performed publicly in New York in the 1960s and 70s. Hardly anyone familiar with Gallo had heard from or of him since 1996.

In 2017, shortly after Rollins enrolled in the graduate curatorial studies program at the University of Louisville, Khoshbin approached him about researching Gallo for his thesis project. Two weeks after Rollins agreed to take on the topic, a box of photographs of Gallo arrived in Louisville. Though disorganized and haphazard, the contents of the box were believed at that time to represent the entire Richard Gallo archive, which Robert Wilson had purchased in 1990. During the year and half he researched Gallo, Rollins expanded the archive by a third. A selection of photographs from this collection is on view through February 23 in an exhibition curated by Rollins and Khoshbin at the Cressman Center for the Arts in Louisville, Kentucky.

As a curatorial endeavor, approaching Gallo’s life and work presents an extraordinary challenge. His work was inadequately documented during his lifetime and has mostly been preserved in the personal archives of friends and accomplices. Gallo left behind very little to elucidate his process and motives. Khoshbin and Rollins have done a remarkable job establishing a baseline record from the existing materials. As viewers, we’re left to fill in the gaps.

From the late 1960s and through the mid-70s, Gallo was an occasional performer in Robert Wilson’s experimental theatrical projects, with roles in The Life and Times of Sigmund Freud (1970), Deafman Glance (1971), and The Life and Times of Joseph Stalin (1973). The images on view include staged photographs of Gallo and documentation of his street performances and frequent costumed nightlife appearances. During his most prolific years, Gallo was a subject of a host of prominent photographers of the era, including Andres Lander, Allan Tannenbaum, Anton Perich, Christopher Makos, Dustin Pittman, Peter Hujar, and Sylvia Plachy, all of whom have works in the exhibition.

Also known as “Lemon Boy” because of his tendency to demarcate the boundaries of his street performances with lemons, Gallo maintained no separation between his art and life. Whether walking around downtown, making an appearance at Max’s Kansas City, performing on the sidewalks in front of luxury stores on Fifth Avenue, or lounging in his apartment, Gallo’s signature outfits were immediately recognizable. The outfits were alternately pieced together from store-bought articles or made specifically for Gallo, most frequently by the designers Ronald Kolodzie and Phillip Haight. Gallo’s aesthetic was characterized by queer, overtly sexual, hyper-masculine camp, sort of like Tom of Finland goes to Studio 54.

In one outfit, Gallo dazzles in head-to-toe silver sequins, crowned by an executioner’s hood made of the same material. Another is made up of a cleverly draped moving blanket, leather pants, harness, shirt, and a steel doughboy helmet. In a third image from one of his street performances, Gallo sports white rubber rain boots, tapered white pants rolled to the hip on one side and tucked into his boot on the other, and a white hood tied behind his neck.

Gallo’s outfits frequently subverted the masculine fetish tropes he presented by including femme-forward elements like fishnets, heels, garish animal prints, and dramatic, sweeping capes. Drawing from various points across the spectrum of gender expression, Gallo’s outfits often echoed the androgynous tendencies present in the glam rock style of the early 1970s. The critical difference, however, is that glam rock existed primarily on the stage, and Gallo saw no distinction between performance and the rest of his life.

Gallo’s street performances—which he carried out uninvited and unadvertised through the mid-70s—drew mixed responses from their unwitting viewers ranging from confusion to aggression. “First the crowd would build up and then the traffic would slow to see what was happening.  Then the police would show up. When I heard the siren, I knew the show was over.  It was a good ending,” Gallo wrote in his diary.

Gallo gave no clear indication to his audience that what he was doing was to be observed and considered as art, and as such, many didn’t know how to categorize what they were seeing. The performances were frequently silent and almost always began with the artist outlining his makeshift stage with lemons. He would then remain still for significant amounts of time, only breaking silence with loud cries of “Ouchamagoucha,” “Harry Winston,” or other nonsense or seemingly random words.

The latter may have been a reference to a line from “Diamonds Are A Girl’s Best Friend,” made famous by Marilyn Monroe in Gentlemen Prefer Blondes. Gallo idolized Monroe, along with other starlets like Marlene Dietrich, Barbra Streisand, and Audrey Hepburn. In one performance inside the jewelry store Tiffany & Co., Gallo wore a black S&M get-up with opera length gloves, reminiscent of the iconic outfit worn by Hepburn in Breakfast at Tiffany’s. Another performance that took place in front of Bergdorf Goodman’s department store appears to have been a response to Barbra Streisand’s 1967 TV special My Name is Barbra. The special includes a segment shot inside the store showing Streisand parading in opulent furs to a soundtrack that deals thematically with poverty and making-do, including “Second Hand Rose” and “Brother Can You Spare A Dime.” Gallo’s works were frequently considered critiques of the sites of luxury capitalism that served as their stage.

Gallo’s street performances occurred contemporaneously with pioneering works by other early performance artists who have been variously recognized or not in the annals of art history. William Pope.L, Adrian Piper, Scott Burton and others from this period have been deservingly recognized for their seminal influence on performance art. Recent curatorial efforts, however, have spotlighted a distinctly queer lineage of street performance artists to which Gallo undoubtedly belongs. Last year, the Lower East Side fixture Artists Space presented an exhibition of theatrical and live performance works by Jack Smith (1932-1989), the underground filmmaker who is now widely regarded as the founding father of American performance art. Rubbish and Dreams, a recent exhibition at New York’s Leslie-Lohman Museum, explored the “genderqueer performance art” of Kentucky-born artist Stephen Varble, a contemporary of Richie Gallo’s. (Another recent exhibition at Institute 193, where I serve as director, presented prints and videos by Varble from the 1980s.) Like Rollins and Khoshbin, curator David Getsy—who organized both Varble exhibitions—relied heavily on personal archives belonging to Varble’s friends and acquaintances to color in the details of his life and work.

Gallo also had limited opportunities throughout the 70s and early 80s to realize and direct staged theater works, including a 1973 work called Squalls mounted in Nancy, France, for the World Theater Festival. For the work, he requested a “helicopter, a stagecoach pulled by 40 Dalmatians, a cadaver, 1 ton of carrots” and, instead, he was given seven hundred dollars. The performance was met with a barrage of rotting fruit from the audience but contrastingly favorable reviews from critics. There were similarly polarized reactions to Tip of the Iceberg, a 1978 work performed in Puerto Rico, and A Killer’s Loose but Nobody’s Talking, Gallo’s last public performance, held in 1980 at The Kitchen in New York. In the latter, the ending of the performance involved flooding the theater with smoke, forcing all in attendance to rush out of the room in coughing fits.

What does it mean to study an artist about whom so little information is available and whose history is fragmented and under-documented? Perhaps it’s an inherently queer endeavor to piece these scraps together and to privilege possibility and suggestion based on what survives above lamenting those concrete details which have been lost. We can use the images and information that remain as jumping off points for all kinds of queer imaginings. The exhibition curated by Rollins and Khoshbin does much to provide as many answers and clues as possible to illuminate Gallo’s life and work but makes few conclusions about what is left unknown.

We don’t know the specifics of every street performance that occurred on Fifth Avenue in New York. We may not understand how the same performance that caused a French audience to hurl rotten fruit at Gallo was heralded by critic Michael Kirby as the first truly avant-garde work he had ever seen. But for an artist and performer such as Richie Gallo, who somehow remained intensely antagonistic yet elusive, this exhibition provides a fitting—if incomplete—tribute. Like the lemons Gallo used to create boundaries around his performances, these images remind viewers that the divisions between art and life are arbitrary and perhaps best handled with irreverence.

Richard Gallo: Performance and Studio, 1968-1980 is on view at the Cressman Center for Visual Arts on the campus of the University of Louisville through February 23.

This review was republished by our partner publication Momus.

Paul Michael Brown is a writer and curator based in Lexington, Kentucky.