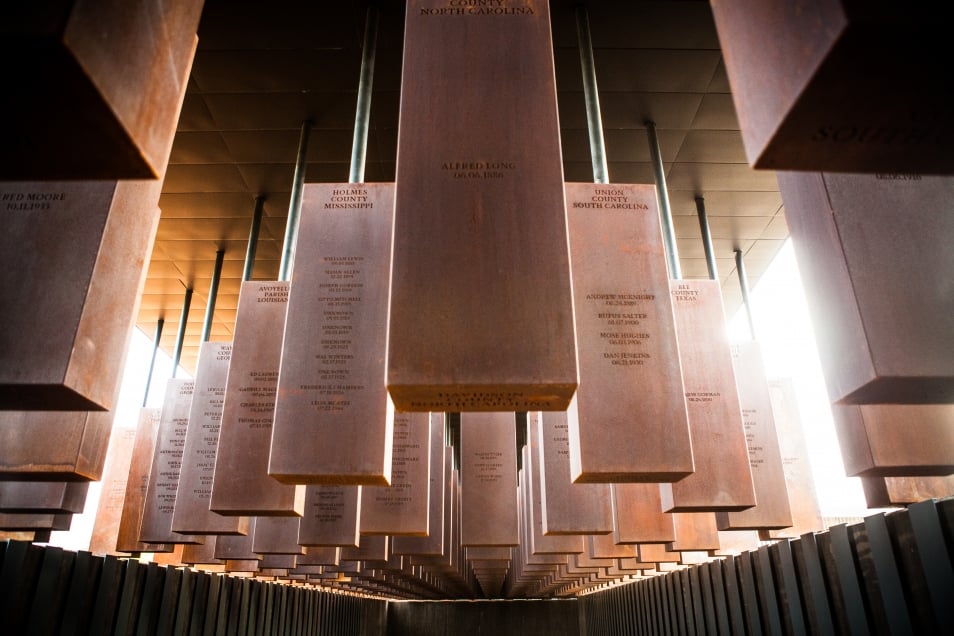 Between 1877 and 1950 in the U.S., more than 4,400 black people were lynched in America. The majority of these—4,084—took place in 12 Southern states: Alabama, Arkansas, Florida, Georgia, Kentucky, Louisiana, Mississippi, North Carolina, South Carolina, Tennessee, Texas, and Virginia. These deaths are the subject of the newly opened National Memorial for Peace and Justice and its attendant Legacy Museum in Montgomery, Alabama, which opened on April 26. Together, they unflinchingly recount the history of racial terror in the South.

As in many Southern cities, sleek urban renewal and ruined storefronts exist side-by-side along the downtown streets of Alabama’s capital. Vintage signage advertises long-defunct businesses, and historical markers and statues offer snippets of the city’s past. It’s possible to stand outside a building from which a telegram was sent — the downtown Winter Building — with orders to fire on Fort Sumter that launched the Civil War, or visit the  stop where Rosa Parks boarded a segregated bus and ignited the Montgomery Bus Boycott. On Capitol Hill, the Alabama Confederate Monument, an 88-foot tall statue dedicated in 1898, is now protected under the contentious Alabama Memorial Preservation Act—passed just last year. Less than half a mile away, Maya Lin’s Civil Rights Monument, completed in 1989 and sponsored by the Southern Poverty Law Center (SPLC), pays homage to the 41 lives lost during the 1950s and ’60s.  The presence of Lin’s monument points to longstanding activism in the South, but a deeper engagement with and public commemoration of the dark truth of the cruelties enacted on African Americans has long been absent. This dearth of representation is made all the more evident by the abundance of Confederate memorials that uphold myths of white supremacy. In 2016, the SPLC identified more than 700 public Confederate statues or monuments nationwide, 107 of which are in Alabama.

Enter the Equal Justice Initiative (EJI), a nonprofit in Montgomery founded in 1989 by lawyer Bryan Stevenson, who decided to take action after a Fulton County court case in which Georgia upheld capital punishment despite clear evidence of racial bias. The EJI fights unjust punishment and incarceration, especially as it affects black Americans. In 2010, the organization began researching lynching in the U.S. and planning the memorial and museum. A substantive history, Lynching in America: Confronting the Legacy of Racial Terror, was published in 2015, enabling the EJI to document over 800 new murders. Plans for the memorial at a 2017 exhibition at the Brooklyn Museum. The goal of these projects is to increase awareness and foster reconciliation.

Designed by MASS Design Group of Boston, the Memorial for Peace and Justice occupies six acres on a hill overlooking downtown Montgomery. A sidewalk leads visitors upward to its centerpiece located at the summit of a hill, a memorial square that commemorates lynching victims. Additional sculptures along the path represent significant historical moments. On the way up, visitors pass a sculpture about the transatlantic slave trade. Exiting the monument, visitors encounter works that comment on the Civil Rights era and contemporary police violence against black people.

Ghanaian artist Kwame Akoto-Bamfo’s Nkyinkyim comes first on the approach to the memorial square. His African identity is meaningful given the work’s subject—people kidnapped from the continent to be enslaved in the Americas. The sculpture’s title refers to the West African Adinkra symbol for the circuitous path of life. Six concrete figures are bound in rusty chains and manacles. Some crouch, their mouths open as if screaming. One anguished woman clutches a crying baby and stretches an arm toward a standing man, a depiction of the separation of families on auction blocks like the one that once stood nearby in downtown Montgomery, a site now a occupied by an innocuous tiered fountain in Court Square.

After passing Nkyinkyim, visitors walk up to the memorial, a covered square organized around an interior open space. It displays 800 Cor-ten steel monolithic rectangles, all oxidized to a rust hue and measuring six feet tall. Half of these are housed inside the open-air architecture; the other half are outside the central covered structure. Each one represents a county and state where a documented lynching or series of lynchings took place, the locations incised  in the block along with a list of the victims. Those whose identities have been lost are listed as “unknown.” Some monuments record one or two names while others index many. Fulton County, the site of the trial that activated Stevenson’s founding of the EJI and the most active lynching county in Georgia, lists 35 murders between 1889 and 1936.

Within the covered memorial square, the monuments initially stand at human height. As visitors progress through the space, the sepulchral rectangles become more dense and ascend—at first, merely inches, eventually far above above ground—mimicking the brutal raising of a hanged victim. Eventually, the accumulated mass of forms hanging overhead is overwhelming, as metaphorically heavy as literally. Slivers of light pierce the space between the forms like sunlight in a forest, imbuing the square’s dim interior with spectral solemnity.

Underneath the most concentrated accumulation of monuments, water runs down a concrete wall bearing a large dedicatory inscription, suggesting sweat and tears. A door leads out to a grassy hill topped by a simple wooden pad. Standing on it, sun blazing above, creates a feeling of vulnerability and uncomfortable visibility to other visitors within the memorial structure, perhaps to invoke meditation on the public spectacle of lynching. Finally, following a path out of the covered structure, a duplicate set of weathered rectangles are organized in linear, alphabetical rows according to county name, each oriented horizontally like a casket.

The EJI’s report categorizes lynchings into five categories: fear of miscegenation, perceived social infractions, accusations of violent crime, public displays that often included torture, executions aimed to intimidate or exile black communities, and punitive action for resistance. Wall text within the memorial square provides brief descriptions of individual deaths selected from more than many documented. Officiating an interracial marriage, worker strikes, or drinking from a white man’s well are cited among the specious rationales. It’s difficult to conceptualize these staggering numbers and horrific facts. It’s one thing to read history, it’s another to walk through it. The EJI memorial creates a visual catalogue and a powerful space for contemplation. Its message is plain: lynchings were terrorist acts meant to oppress and intimidate the black populace in the South. The Great Migration, during which six million black people moved north, was a direct result.

The effects and violence against black Americans persist. Exiting the central memorial square, the pathway leading visitors towards the exit is lined with sculptures that respond to the ongoing narrative of brutality, oppression, and resistance.

Oakland-based journalist turned artist Dana King’s Guided by Justice, 2018, shows three black women who represent protesters who broke city and state segregation laws during the Montgomery Bus Boycott. Rather than focusing on specific figures, like Rosa Parks, King shows anonymous figures, slightly larger than life. A stooped woman leaning on a cane leads the trio that also includes a teacher and pregnant woman. In  Hank Willis Thomas’s work Raise Up, 2016, 12 men cast in bronze seem to be encased in gray concrete, their upstretched arms in the hands-up-don’t-shoot gesture inspired by Michael Brown’s 2014 shooting in Ferguson, Missouri. Its presence here links contemporary murders of unarmed black men to the history of lynching and its goals of terror and subjugation.

Delving deeper in the history of slavery in the U.S. and its continuing repercussions, the nearby Legacy Museum in downtown Montgomery begins with the domestic slave trade and progresses forward through the economics of convict leasing in the South and contemporary incarceration. Wall text identifies the museum as the site of a former warehouse and slave pen and explains Montgomery’s active role in the industry. A short film, made by HBO, humanizes this history in the account of an enslaved man torn from his family in Maryland to be “sold down the river” in the South. A dark hallway houses  six cells. Inside each are spectral videos of men, women, children who react individually to their captivity—some silent, some speaking, and some singing. .

A selection of primary texts and images organized along a large timeline overtly connect racism of the 18th and 19th centuries to the present. A postcard made from a photograph of Laura and L.D. Nelson, a mother and son lynched in Oklahoma in 1911, points to a wide acceptance of such atrocities. (The EJI identifies Oklahoma as one of the more active non-Southern states.) Another photograph shows a corpulent white man on a horse accompanying black men dressed in white. Illuminated by harsh sun, the men stir up dust as they march on land identified in wall text as  a former plantation. It was taken in 2011 at the Louisiana State Penitentiary; save for contemporary dress, it could have been taken two centuries prior.

Among the museum installations is a wall of jars filled with dirt from various lynching sites that was collected by volunteers [watch Oprah Winfrey’s visit to the memorial on 60 Minutes here]. Each bears the name of a victim and the date and place of death. A mixture  of these soils is on display in a casket-like glass box at the memorial square, making explicit the connection between the memorial and museum. At the center of the museum is Doubt, 2017, by Titus Kaphur. Made of wax, tar, and metal, it shows a man, larger than life and kneeling as if in grievous supplication. He holds multicolored crumpled fabric in his arms. Around him are reproductions of slave sale notices.

Penultimate to the conclusion of the information-rich Legacy Museum is a series of photographs, each captioned with brief text and a question that charge visitors to consider issues pertinent to the EJI’s mission such as interracial romance, faith, education, police brutality, prison reform, and the role of monuments. One, describing the 2015 exoneration of former Alabama death-row inmate Anthony Ray Hinton implores visitors to consider the ethics of capital punishment. Another asks visitors to consider ways to memorialize the history of lynching within their own communities: “If you live in a county where a racial terror lynching took place, will you join an effort to memorialize your community’s history?”

The final statement comes in the form of works by Sanford Biggers and Glenn Ligon. Near the exit is Biggers’s elegiac (BAM) For Michael, 2015. Like Thomas’s Raise Up, it takes the tragic death of Michael Brown as its subject in a sculpture and video. Larger than life, an abstracted figure stippled with bullet marks and missing his left foot. The bronze form is based on the shooting of a smaller figurine documented in a looping short video, the staccato of a firing gun constantly audible in the museum’s space. Ligon’s work hangs nearby—a neon sign that reads like the close of a letter: “WITH HOPE.”

The optimism that does emerge, perhaps, from the new memorial and museum comes from the timely contribution they make to the discourse on our history at a time when Southern states grapple with whether and how to remove racist Confederate monuments, like the one nearby at Montgomery’s Capitol Hill, and Americans confront the tragic effects of implicit bias and racism.  Together, the elegiac memorial and didactic museum charge visitors to reconsider the past and to effect change in their communities.