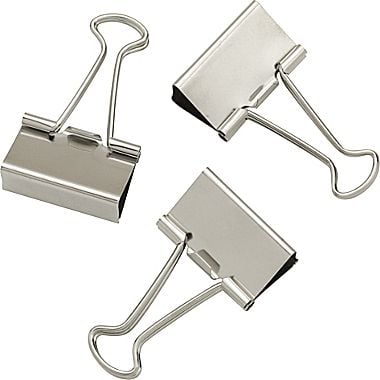 Dear BURNAWAY,
I have a show coming up at a small gallery in my city. I’m showing a lot of new work: paintings, installation, screen prints, and photographs. My question has to do with hanging the prints and photographs. I want to use the same hanging method for both, to keep it consistent. I’ve decided to go with metal binder clips because I don’t want to put holes in anything and I’ve seen it used multiple times in galleries. Is this my best option? Do you have a better suggestion for me?
Hung Up in Georgia
[su_divider top=”no”]
Dear Hung Up,
First, congratulations on your exhibition. Now you’ve got the whole wide world at your ink-and-turpentine-soaked fingertips. Showing new work is a risky, stressful affair and I’m proud of you for getting out of bed every day and actually making the stuff. That’s no small feat.
Now, your question about hanging methods requires me to channel my inner Joan Crawford. Don’t remember her? Allow me to refresh your memory. In the 1981 movie Mommie Dearest, Faye Dunaway convincingly played the screen queen as the world’s most evil mother. In an iconic bat-shit crazy scene, Crawford berates her daughter Christina for using wire hangers. “I buy you beautiful dresses and you treat them like some dishrag! Three-hundred dollar dress on a wire hanger!” She famously scream-cries the most insane-sounding three words in cinematic history: “No … wire … hangers!”


As it turns out, that’s kind of how I feel about binder clips.
I know you wouldn’t even think of using those horrendous black ones, so I am going to assume you mean the all-silver clips you can buy at Staples. I don’t doubt you’ve seen them used in other galleries or on Pinterest, but for artssake, Hung Up, please rid them from your mind. If I had neuralizer—you know, that wand Will Smith uses to erase minds in Men in Black—I would flash it at you it right now.
Binder clips—death clasps, claws of Satan, or whatever you want to call them—are not okay in a gallery setting. First, they’re visually intrusive. Second, they make you look pretty lazy. Third, while they seem innocuous, they absolutely can, and often do, make impressions in the paper, especially photographic paper. I learned this the hard way when an incredibly talented artist-friend of mine gave me a beautiful silver gelatin print that I left hanging, by two big clips, in my living room for three months. When my landlord told me he’d sold my adorable residence to developers who would raze it and build a comically large home in its place, I tearfully unclipped the photograph from the wall to find two heartbreaking horizontal indentations along its top edge. And you know what? You can never go back from that. Maybe if you hired a conservator you could, but let’s be realistic: it’s not worth the trouble.
So what you’re going to do, my little pumpkin butter, is nix the clips and buy a pack of extra large head clout nails and some small round disc magnets. Measure an inch or so inside where the corners of the paper should be, hammer the nails flush into the wall, and secure the paper between the nail and magnet. The extra large head on the nails gives you some leeway with magnet placement. Unless you’re a modern-day Pythagoras, you’ll probably need it.
Last but not least, Hung Up, I challenge you to think hard about presenting so much media in a “small gallery.” Self-editing is a beautiful thing. If you know you’re not good at it, try getting some outside opinions from trusted pals. Just because you have a lot of work doesn’t mean you should show it. An exhibition is an opportunity to say something clearly. Think hard about that thing you want to say. Diversions and underlying themes will create depth, but make sure your pieces are working together to convey a coherent concept. Remember: in an room full of voices, you can’t make out a single one … unless they all start saying the same thing.
Got a burning question for Sara? Send it to [email protected]
Sara Estes is a writer and curator based in Nashville, Tennessee. She currently works at David Lusk Gallery and is the former gallery coordinator for the Carl Van Vechten and Aaron Douglas Galleries at Fisk University. She is also the apprentice to renowned paintings conservator Cynthia Stow of Cumberland Art Conservation. Estes is the cofounder and curator of the Nashville-based contemporary exhibition space, Threesquared. Her writing and art criticism has been featured in numerous publications, including BURNAWAY, Number, Nashville Scene, Nashville Arts Magazine, ArtsNash, and ArtNow.

share Print
Related Stories
Close Look
Burnaway takes a close look at Black Orpheus, an exhibition at the Chrysler Museum of Art in Norfolk, Virginia, opening October 7, 2022.
Artist Environments
Writer Annie Moye returns to Cornelia, Georgia for the Big E Festival in this theme story for Artist Environments.
Oolite x BA
Curator Dainy Tapia writes, “At Large,” comes from the French au sens large, which translates as at liberty or free of restraint.” In this Oolite x BA piece, Contributing Editor Jason Katz reflects on freedom and space.
Subscribe
to BurnawaySign up to recieve the Burnaway newsletter and get notified about upcoming events and opportunities.* required field