Burnaway > Features > Authors on Art: The Strange Logic and Humility of Amos Goldbaum

Authors on Art: The Strange Logic and Humility of Amos Goldbaum

in Artists on Art Please welcome Eric Raymond for this month’s Authors on Art, a series of creative responses by poets, novelists, and experimental writers curated by Blake Butler.

I came across Amos Goldbaum’s work at a time in my life when my own world didn’t quite feel real. He was on Market Street near the Montgomery Street Station in San Francisco in 2008, selling inkjet prints of his work from a homemade kiosk. I was reeling from yet another business meeting in which more than 50 percent of all spoken and written language was abstracted from any meaning. Something about his work seemed perfectly right for my life. I bought a $15 print with a menagerie of hippos and prehistoric copy machines.

In the four or so years since, Goldbaum’s work has blown up across the city, most recognizably in the form of t-shirts and hoodies emblazoned with his take on San Francisco icons—Sutro Tower, Dolores Park, the Ferry Building, and even the rogue beard of Giants pitcher Brian Wilson.

His most compelling images go beyond these familiar places, yet even in these more commercial love letters, his work is defined by something reminiscent of blind contour drawing. Recall that elementary art class revelation? When you were asked to draw an object without looking at the image or lifting your pencil from the page? In your mind, a magically transcendent turkey. On the page, the trauma of total disorientation, the hand betraying the mind. Why won’t the line behave? Why won’t it represent?

Across all of Amos’s art is the warp of his sentient line, a swollen cant, a wobble, the quivering baroque of a concrete grotesque. His are not purely contour drawings, but they seamlessly connect mask, machine, and beast in workaday dreams.

You may, with a wry smile, wonder at Goldbaum’s strange portraits abstracted from their context. What could they mean? What strange logic is behind this scene? What explains these worlds?

What of the earnest technicians behind the industrial Rube Goldberg monsters making faces? What of all the hardware hailing from an era before the guts were tidily tucked in sleek plastics and Brazilian-waxed out of view? What of his anachronistic/futurist subjects in sensory simulation experiments? What of the heads of old men whose eyeless or all-eye-white regard somehow make you feel like the alien, the outsider, the visitor, the specimen?

On his page seems to be one continuous line, a line that describes the depth of a fully-formed world, a reality with rules and technology plainly known to its inhabitants—simply not to you.

It would be easy to write off Goldbaum’s universe as an exercise in a kind of nostalgic irony built through lurid juxtaposition, the cheap happy-hour surrealist’s cocktail. And here’s where things get slippery.

You are, right now, living in a world where armies of rational people clad in spandex and lycra gather together in closed rooms under thundering techno music to ride bicycles going nowhere. In your world, a surgery exists to implant an inflatable silicone device around the top portion of your stomach to keep you from eating yourself to death. Right now, you are quite likely to spend a night out at a bar sitting next to people staring into screens while you also stare into your screen, hoping for messages or indirect updates from people elsewhere staring at their screens.

There’s something I return to in Amos Goldbaum’s art when I write, and it may well be the feeling that one continuous line can redefine the universe. That a whole world can be illuminated from a partial view. That it is possible, with effort and humility, to not take your eyes off of what you see in your mind, and along the way liberate someone to a more compelling insanity.

Eric Raymond lives and works in San Francisco. His novel Confessions from a Dark Wood is available from Sator Press. 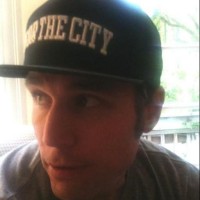