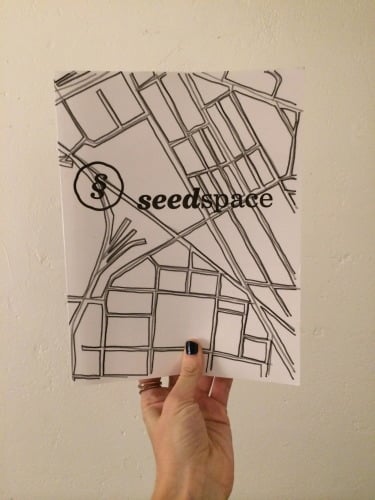 All resistance does not necessarily occur in space; rather it takes place through the agency of discourse, discourses that mark, channel and position the body through and in other perspectives. –George Bataille

In the difficult world of small, independently run arts institutions, the need for self-documentation is great. Arts publications may provide spotty, transient coverage. And limited funding doesn’t always allow for the production of exhibition catalogues enjoyed by larger galleries and institutions.

Taking matters into their own hands, two relatively young Southern spaces, Institute 193 in Lexington and Seed Space in Nashville, recently undertook publishing projects in an effort to make concrete and lasting their contributions to their communities.

To publish their respective books, each gallery received funding from city and state agencies, and both share a major benefactor, the Albuquerque-based Elizabeth Firestone Graham Foundation.

Seed Space’s paperback catalogue documents three years of shows, from 2010 to 2013, and features photographs along with critical essays and programming information. Contributors include Michelle Grabner, Stuart Horodner, Amy Mackie, and Rachel Bubis. The focus of the narrative seems to be on space: the space of the gallery as an intimate exhibition venue, and as a space that embodies a sometimes-dissenting ideological framework that resists the need to neatly contain art.

With numerous full-color spreads, Institute 193’s 159-page hardcover book has a higher production value, with primary emphasis on images of artworks. Introductory texts by Jones and Lilly Lampe call to reader’s attention the spatial confines of the narrow storefront gallery and ask how that space should be measured: by square footage or by impact?

Both foreground the tension between a modest physical presence and the ability to generate thoughtful dialogue, exciting work, and lasting community impact that’s larger than life.

Alix Taylor is an Atlanta native and student at Brown University. She was a BURNAWAY editorial intern in summer 2013 and interned with Hyperallergic in New York in summer 2014.