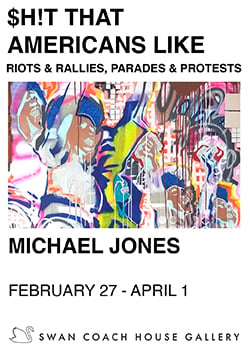 Mark Yourself Safe, multidisciplinary artist Ashley Johnson’s current exhibition of photographs at SECCA, is a rumination on love and fear. The hazard orange ink blots resonating from the luminous black skin of her subjects came to her in a dream: young Black men running away from a group home, painting each other’s backs with talismans, marking themselves “safe” as a prayer of protection from a world hellbent on destroying them.

We publicly mark ourselves “safe” from Acts of God on social media. Acts of God, natural disasters or miracles, rise above human constructs and force us to confront our place in systems beyond our control. But when the levee breaks, a city ward is decimated while another remains relatively unscathed, is it an Act of God or an indictment?

The subjects of this series, including Johnson’s own brother, offer up their skin to the viewer. Vulnerable, back turned, they are at the mercy of our fears and projections. Johnson asks us to isolate the ink blots themselves, reflect on their resonance within our psyche as an exercise in neutralizing the Black body that carries it. Just as a Rorschach test builds upon itself, each subconscious connection disarming you and carrying you further into your anxieties, Johnson’s Ink Blot series develops slowly as subjects reveal themselves to the viewer. Tattoos appear beneath the orange paint, a body turns to you, until finally the round eyes of a child meet yours over the shoulder of their protector.
Mark Yourself Safe is as much a manifestation as a psychological study. Through these intimate portraits, Johnson transforms a target on the backs of those she loves into a sigil of protection.

Mark Yourself Safe is on view at the Southeastern Center for Contemporary Art (SECCA) in Winston-Salem, North Carolina through February 14th. It is the 18th installment of the Southern Idiom series.

share Print
Related Stories
Nodes and Networks
Nelson outlines two decades of her experiences with "Art Internet," charting a generational course from her peers on LiveJournal and DeviantArt in the early aughts to their influence and power in the art world today.
News
Center for Craft gives financial support to researchers, the new curator at SCAD, and more in Burnaway's bi-weekly news roundup.
Close Look
Burnaway takes a Close Look at a group exhibition of sculptural vessels at Nina Johnson in Miami.