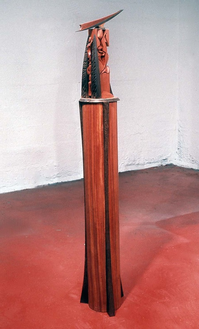 Etienne Jackson highlights his growth in life through a simplistic sculpture, using cast iron and graphite. Jackson’s 2014 piece The Journey, on display at Hammonds House Museum, conveys his own sense of aspiration to view what he has overcome in his life. It is more than just a rock with lines hanging on a wall.

The media of the painting established the interior of the wood molding, generating more positive space in the inner compartment of the box, eventually broken into four panels. By using a casting iron Jackson burned the pinewood molding, making its variety of straight, curved, and bumpy, and mixture of intersecting lines, shapes to form the texture, and hidden aspects of the work. The color in the structure describes a grayish-monochromatic hue. Every material demonstrates the aspect of emotions meant to get out of the art, including the parts that are not shown (known as flat backs) are just as important to embrace the piece as a whole.

Jackson made a way for people to connect with his art through his eyes but also in a way that was a “more complex surface relationship” and unified structure. He built this piece to show a slideshow in the beginning of his hardships to the reconciliation of a new and promising life. Jackson combines a complexity of language and images to commemorate and bring to life his world, The Journey represents a child entering adulthood progressing through life with intelligence and wisdom.

Based on his other works of art, his life trials and tribulations are a common factor in all of his pieces. No one type of material or technique could exist on its own, whether it was the visible iron and graphite or the hidden paper, wood, and plastic. When it came to art he embraced the phrase, “One man’s trash is another man’s treasure.” As the son of a carpenter, he wanted to do something different. However, Jackson used art to break away from the family norm, he found himself at his carpenter roots of self-expression.

Myesha Mitchell is a junior at Hapeville Charter Career Academy.

share Print
Related Stories
Invasive Species
MJ Sanqui parses through the residue of human development in their review of NCMA's recent photography exhibition, The Altered Environment, curated by Maya Brooks
Letter from Jackson
Editor Jasmine Amussen recounts a spring in Mississippi and the waters that move thru us and the Legacies of the Great Migration at Mississippi Museum of Art.
Reviews
Jacob O'Kelley gazes into Michelle Laxalt's ceramics and collages on view in whitespec at Whitespace, Atlanta.
Subscribe
to BurnawaySign up to recieve the Burnaway newsletter and get notified about upcoming events and opportunities.* required field