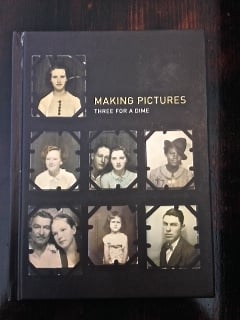 This October, two book projects and an exhibition are coming to fruition, and all involve artist, writer, and curator Phillip March Jones, former director of the Souls Grown Deep Foundation in Atlanta. Institute 193, the nonprofit art space that he founded in 2009 in Lexington, Kentucky, will show the exhibition “Making Pictures: Three for a Dime,” which is accompanied by a publication authored by Arkansas-based artist Maxine Payne. Additionally, {Poem 88} EDITIONS, the new publishing arm of {Poem 88} Gallery in Atlanta, will release its first-ever publication, Pictures Take You Places, a collection of Jones’s own photographs.

Arkansas in the 1930s was, by no means, a stranger to hard economic times. By 1933, the Great Depression, a prolonged drought, and a decline in cotton prices contributed to an unemployment rate of 37 percent, as half the manufacturers in the state began to close their doors. Families struggled. Daily meals became a luxury that many could not afford.

“Making Pictures: Three for a Dime,” on view October 9-November 15, introduces us to the Massengills, an Arkansas family that was determined to make ends meet under the devastating economic circumstances. To support themselves, they started a family business, for which they furnished trailers and turned them into mobile photography studios. On weekends, the family would travel to rural towns across the state, offering townspeople the opportunity to have their portraits taken: three photos for 10 cents.

The show’s accompanying catalogue is co-published by Institute 193 and the Atlanta-based reissue label Dust-to-Digital. In January 2015, the exhibitionwill make its way to Christian Berst Art Brut, a newly opened branch of a Paris gallery located on New York’s Lower East Side, where Jones is now the director.

On October 15, {Poem 88} EDITIONS will release Jones’s Pictures Take You Places, a collection of 52 full-color postcards. There will be a book signing at {Poem 88} gallery as well as an event celebrating the edition’s release at Institute 193, both taking place sometime in November.

The book is the culmination of a project Jones started in 2011, when he began posting a daily photo on his TUMBLR page, for which he would capture a random moment of each day with his iPhone camera. Despite the fact that Jones takes his viewers around world—from Brooklyn to Atlanta to Trouville, France, and so on—the photographs are not characterized as a travel diary; instead, apart from their original purpose as an exercise of individual perception, the photographs serve as a trace, depicting moments when reality for Jones suddenly seemed a little less real. Besides the artist’s occasional selfie—whether of his reflection in a storefront window or an obscure image of his shadow on the ground—there is hardly any inclusion of people. There is a silence to these photographs. His experience, no matter how seemingly personal, carries with it a certain aura of everydayness that many of us can certainly relate to. In other words, the photographs appear uniquely intimate, as well as commonplace and familiar.

Both Making Pictures: Three for a Dime, with its portrayal of the intimacy of family,and Pictures Take You Places, with its depictions of quiet, ephemeral moments in the modern world, provide viewers with a register of time, memories, and life.

share Print
Related Stories
Nonhuman
In this theme story, Jasmine Amussen revels in the pagan delights of Southeastern Conference mascots.
Staff Picks
Burnaway staff celebrates the month of April with a list of our favorite organizations, BA stories, albums, artists, films, books, and events for Earth Day.
Call For Artists
Our monthly round up of calls, residencies, and opportunities includes grants from Getty Images, the Andy Warhol Foundation, and Anonymous Was A Woman.
Subscribe
to BurnawaySign up to recieve the Burnaway newsletter and get notified about upcoming events and opportunities.* required field