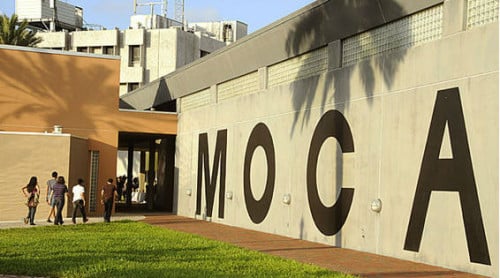 The Museum of Contemporary Art North Miami has ceased operations. In a statement released yesterday, co-chairs Irma Braman and Ray Ellen Yarkin announced that the MOCA staff is vacating its city-owned building and will reopen as the Institute of Contemporary Art in a temporary location in Miami’s Design District. Access to the institution’s website is currently blocked by the posted announcement.

The news comes after a months-long battle over the institution’s identity and direction between the trustees and the City of North Miami, which in December appointed Babacar M’Bow as interim director. The board rejected the appointment when M’Bow, who is a friend of the city manager, managing editor of the Encyclopedia of the African Diaspora and a local art gallery owner, has already undergone a screening at the hands of city hall, would not comply with a background check, though the city had already performed one.

A series of missteps ensued, with M’Bow planning a symposium without going through proper procedures; planning programs and events that duplicated MOCA’s recent programming; signing official correspondence as “director” even though he had yet to be approved; and boasting of his battle experience in his native Senegal as a veiled threat.

Longtime director Bonnie Clearwater, who was highly respected for her programming, left the museum last summer to become director and chief curator of the NOVA Southeastern University’s Museum of Art in Ft. Lauderdale. MOCA curator Alex Gartenfeld was named interim director in September 2013, but when the city refused to pay his salary, as well as building maintenance fees, the board sued for breach of contract.

“The Board sought an on-site expansion at our former home in North Miami for more than a decade, as the demands of our collection, program, and audiences grew and our museum gained international acclaim,” Braman and Yarkin explained in the release.

The two parties had already been clashing over MOCA’s proposal to transfer its 600-piece collection to the Bass Museum in Miami Beach. Trustees cited the 2012 $15-million bond measure to fund the museum’s expansion that was quashed by residents of the mostly working-class city.

The reincarnated museum will occupy the second floor of the Moore Building, and will have 12,500 square feet of gallery space (compared to its former 7,500). The space will be provided free of charge by Miami Design District Associates, a partnership by collector Craig Robins and L Real Estate. The board said it will soon begin a search for a permanent home.

According to Hunter Braithwaite, editor of the Miami Rail, “now there will be more contemporary art in the Design District, which is great in many ways, but also represents a consolidation of art and culture in a metropolitan area which is anything but consolidated.”

But, he said, “this whole fight also highlights the ineptitude of local government. It really complicates the David and Goliath story when the Mayor of North Miami is arrested for mortgage fraud, as Lucy Tondreau was this spring.” Perhaps reflecting the sentiments of slack-jawed observers, he added: “I’d love to see the North Miami Museum come into its own as distinct venue dedicated to underserved artists in the community, and the ICA to continue its great programing.”

share Print
Related Stories
Oolite x BA
Sergy Odiduro visits Memories at Pan American Art Projects in Miami.
Features
Tara Stickley visits the brutal and beautiful work of Luis Cruz Acazeta at the Ogden Museum, New Orleans.
Applications Due May 17!
Criticism is often misunderstood as a form of combat – the writer against their subject. The 2022 Art Writing Incubator will focus on how considered, measured criticism can be an act of communion between artists and critics.
Subscribe
to BurnawaySign up to recieve the Burnaway newsletter and get notified about upcoming events and opportunities.* required field