Burnaway > Reviews > McCallum and Tarry: Evidence of Things Not Seen

McCallum and Tarry: Evidence of Things Not Seen

After reviewing Bradley McCallum and Jacqueline Tarry’s Within Our Gates installation last month, I looked forward to seeing the artists’ two-dimensional work at Prospect.1, the international biennial in New Orleans. I was not disappointed: “The Evidence of Things Not Seen” beautifully presents 103 works based on mug shots of individuals arrested during the 1955-56 Montgomery Bus Boycott.

Wandering through the New Orleans African American Museum, I learned that each of these works has two layers: a black and white silkscreen superimposed over a color oil painting on linen. The gauzy top layer forces a simultaneous reading of painting and silkscreen. As a result, the portraits gain a slightly blurred, ghost-like quality. This effect makes the subjects seem both present and absent: the identity of each individual is undeniable, even though their arrests have reduced them—and their allegedly unlawful actions—to a mere ID number.

In these mugshot revisions, McCallum & Tarry physically separate the portraits of the individuals from their corresponding numbers, which appear only on the silkscreen, along with ghost-like apparitions of the subjects. (Examples of just the paintings can be found on McCallum and Tarry’s website.)

Though the works’ impact relies on the interplay of these two layers, the artists nevertheless manage to privilege their subjects’ individuality over their numbered, and therefore objectified, selves. The detainees’ strength and spirit—and by extension the power of the Civil Rights Movement—shows through.

Each individual interacts with the number hung around their neck: even a non-reaction is a reaction. Postures, hand gestures, and facial expressions resonate with non-violent resistance. Many of the detainees stare in defiance. Some appear exhausted and saddened; a few look upward. Others close their eyes in self-containment.

As a group, they scream in silent intensity. Their dignity contradicts their outlaw status, perhaps even redefining what it is to be an outlaw. The police ID numbers around their necks—signifying order, peace, and justice—ironically become the most violent aspect of the images.

The New Orleans African American Museum is an excellent venue for “The Evidence of Things Not Seen.” It is located in the Meilleu-Goldthwaite House, built in 1828, which is lauded as the finest example of French Creole villa construction. The inviting, homey interior compliments the portraiture aspect of McCallum & Tarry’s work, while effectively clashing with its mugshot status.

When viewing “The Evidence of Things Not Seen,” I felt like I was walking around in someone’s home, surrounded by a type of family photo album. This sensation enhanced the effectiveness of McCallum and Tarry’s installation; at times I felt emotionally overwhelmed.

The formal brilliance and conceptual complexity of “The Evidence of Things Not Seen” is almost as dizzying as the hazy figures imaged in the the portraits themselves. Like Within Our Gates, layers of nuance make the installation powerful on both an intellectual and an emotional level.

Prospect.1, including “The Evidence of Things Not Seen” and other participating shows throughout New Orleans, runs through Sun. Jan. 18. 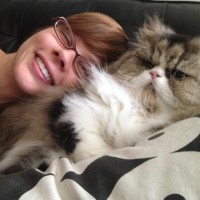