In his exhibition “An Imperfect Force” at Antenna Gallery, R. Eric McMaster—the winner of Press Street’s 2014 Open Call—explores the systems that govern various sports by manipulating their rules and forms.

McMaster’s show centers on a video installation, The Obstruction of Action by the Existence of Form (2013), which depicts two six-person hockey teams struggling to play in a rink shrunk to about 20 feet in length. The players slam into each other as they shuffle around, confined by the structures of the game. The rink itself crowds the gallery, allowing viewers to watch the video through its polycarbonate barriers. In another video—Pendulum (2014)—McMaster focuses on the repetitive bounce of a female athlete’s ponytail, replacing her surroundings with a color field so that she is perpetually running in place.

McMaster also relishes in the textural sumptuousness of the synthetic materials of the sports world. In A Colored Image of the Scrum (2014), he transforms a mass of interlocking rugby players into a gradient of digitally printed uniforms. A 3D printed white T-shirt hangs on the wall, smooth and solid, void of all signs of human touch. A similarly pristine towel spins on the floor mysteriously, seemingly possessed.

“An Imperfect Force” reads as a case study on the physical and social systems that define our everyday lives, pointing to the possibility of reimagining them.

R. Eric McMaster’s “An Imperfect Force” is on view at Press Street’s Antenna Gallery through October 5, 2014.

Charlie Tatum is an arts worker currently based in New Orleans. He received a BA in art history from New York University in 2011 and published HEJ: a print-curatorial project with Dana Kopel. Originally from Greenville, South Carolina, he has recently moved back to the South after nearly seven years in New York. He is currently working as education and visitor services associate for Prospect New Orleans. 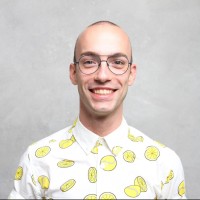