An Historical Instrument: Kevin Beasley at the Whitney, New York 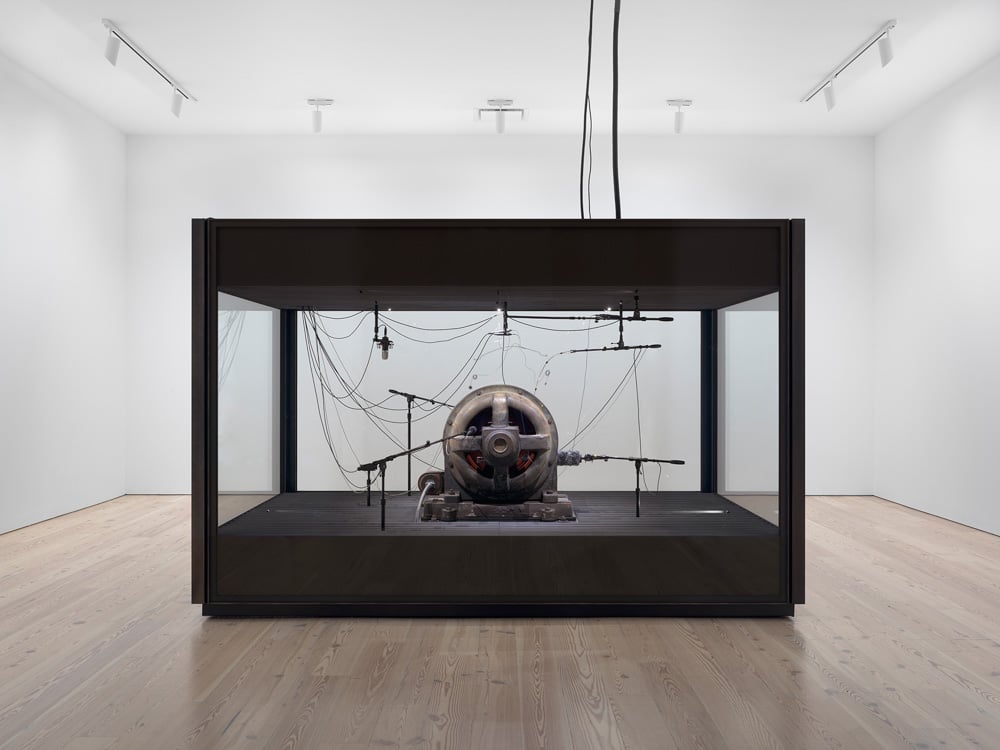 The first sentence of the press release for Kevin Beasley’s exhibition A view of a landscape at the Whitney Museum of American Art promised that a fully-functioning cotton gin motor would be on view. With the spotlight dramatically set on a gross symbol of American slavery, foregrounding the country’s ongoing practice of systemic racism, it was safe to guess all other promotional material would be overshadowed. Social media also helped to disembody the image from its provenance: Instagram documentation consisted almost entirely of the motor, tagged sporadically, and by week two of the show’s run, it had gone viral (at least in my feed). In conversations with my colleagues, discussion universally concluded with the public’s responsibility to bear witness, but few concrete details were shared. Even the museum comes off as ill-at-ease. Both the wall text and curatorial essay note that the museum’s founding family and Eli Whitney, the inventor of the cotton gin, were not directly related.

But Beasley’s nuanced approach to exhibition design seems to anticipate the stark politics that inform representations of race. The machine has been restored to working order, and the artist grants it a gallery all to itself. In spite of this monolithic treatment, however, in which the hulking industrial equipment would be expected to perform an aggressive, fearsome, even violent demonstration for the audience to witness, it has been silenced by a sleek, soundproof glass box. The scene comes off as a shock, with the separation of sight from sound demonstrating that racialized perception is not just visual, but reflected by the other four senses, as well. Beasley also provides a rigorous contextualization of the motor and its history. Viewers are informed that this particular model began operations in 1940 in Maplesville, Alabama, and represents a form of technology that kept Southern Blacks in indentured positions long after slavery was abolished. It was almost a decade after the Civil Rights Act of 1964 that the machine was decommissioned, and only then because the economics of cotton shifted production to China. The cotton gin isn’t just a vestige of the nineteenth century. Beasley’s acquisition of the motor demonstrates that they may still turn up on eBay.

According to the curatorial essay, the artist’s first contact with real cotton plants sent him into a fugue state. An annual family reunion brought him back to Virginia, only to discover his relatives’ acreage had been leased out and planted with the longtime staple crop of chattel slavery. The sight created a rupture between time and place for Beasley. A similar sense of dislocation is achieved by the exhibition design. Several microphones record, with varying levels of sensitivity, all of the noises the cotton gin motor produces, and pipe the information into an adjacent gallery. The recording equipment belies a morbid fascination with the motor, making it appear like a taxidermied animal. That the machine actually runs is similarly portentous: the scene it creates is as lucid and uncanny as an anxiety dream.

Similar pastoral delusions are produced by the real-time recordings in the adjacent gallery. (Essentially, Beasley plays the cotton gin motor like a musical instrument). The experience generally depends on where one stands or sits: I heard a creaky wheel in one area, a low thrush filled another. Different sounds conjure different images of agrarian life, though not everything is so disturbing. Beasley has set some areas to a more cheerful, even wistful pitch. Overall, the artist’s light touch with sound design gives every tone a vacant, foreboding quality, as if brought in on a distant wind; additionally, subwoofers have been installed below a few benches and rattle anyone who sits there.

The show also includes a series of “slab” sculptures, which amount to freestanding walls made from raw cotton and resin. Whereas the rest of the show subtly evokes country life, the slabs are pretty literal about landscape, as well as decorated with some autobiographical odds and ends. The Reunion (2018) includes strapping printed with the word “Sam,” the name of Beasley’s grandfather. Campus (2018), an ironic ode to Yale, the artist’s alma mater, counts among its materials the Atlas of the Transatlantic Slave Trade. In The Acquisition (2018) a series of du-rags create evocative cavities, which resemble ghosts of the deceased. But these positive notes ignore the hamfisted, flatly instructional quality of depicting a landscape with the materials historically grown there

Ultimately, a series of performances at the Whitney demonstrate that the exhibition’s most salient gesture was to convert the cotton gin motor into audio equipment. For the January 12 concert, musician Taja Cheek was invited to play the machine with Beasley. Birdsong rang from the speakers, but with the twist of some knobs, the room filled with disorienting static. The only moment of reprieve would come when Beasley exited, permitting Creek to perform solo. “Rain. Drop. Rain. Drop,” she spoke, recording the loop upon which her set was based. Recognizable words brought relief from the laborious performance—they were the first familiar sounds I had heard in well over an hour. But even her use of language was agnostic, with “Rain. Drop.” soon taken apart note by note. Cheek’s expression was in keeping with the rest of the exhibition, which redirects the motor’s energies to disentangle meaning from sensation, and sensation from history. Sound might be the means to right our historical consciousness in A view of a landscape, but Beasley is careful to point out that certain undertones can only be experienced through the body.

Kevin Beasley’s solo exhibition A view of a landscape is on view at the Whitney Museum of American Art in New York through March 10. Sam Korman is a writer based in New York.