The pioneering postminimalist artist Keith Sonnier, best known for his expressive use of neon light, died in Southampton, New York, on July 18, 2020, at the age of 78. Sonnier was born in 1941 in Mamou, Louisiana, the self-proclaimed “Cajun music capital of the world.” After receiving his B.A. from the University of Southwestern Louisiana, Lafayette, he studied under Roy Lichtenstein, Robert Morris, and Robert Watts at Rutgers University and received his M.F.A. in 1966. Later that year, Sonnier was included in the monumental abstraction show Eccentric Abstraction, curated by critic Lucy Lippard at Fischbach Gallery, alongside artists Eva Hesse, Louise Bourgeois, Bruce Nauman, and Gary Kuehn. The show’s title was coined by Lippard as a means to describe “an exploration of sensuous experience…and the withdrawal of personal expression in favor of exploration of the material properties of contemporary industrial materials.” The exhibition is now remembered as an early high-water mark of postminimalism. Sonnier’s work at this time utilized incandescent lights, latex, satin and cheesecloth in wall sculptures that aligned more with abstract painting than sculptural objects. Frustrated with the limited capabilities of incandescent light, Sonnier began his career-long engagement with neon in 1968. His early neon wall works wrapped light in twisted configurations with found objects like chicken wire, foam, and steel.

Sonnier found a creative home in the 1970s SoHo scene among artists such as Gordon Matta-Clark, Nancy Holt, Robert Smithson, and his fellow Louisiana native Tina Girouard. Along with his peers, he began exploring video art and performance, and notably began several life-long series of works, such as Ba-O-Ba, Dis-Play and Sel. His videos and performances relied on feedback loops of live news or microphones picking up the audio of passersby. Sonnier’s Ba-O-Ba series, 1969 – 2020, borrows its title from a Hatian-Creole phrase meaning “bathing in moonlight”—these works reflect the viewer in moon-shaped panels haloed by neon light. While his contemporaries such as Bruce Nauman used neon to create glowing text, Sonnier expanded its potential, creating ephemeral, abstract light-drawings. Over the course of his career, Sonnier implemented industrial materials like transformers, acrylic and mirrors to draw out both illusionary and sculptural portals, invoking a phenomenological viewing experience.

Later in his career, Sonnier received large-scale commissions for airports, hotels, and other public spaces. He became interested in intertwining light with architecture, both sculpturally and experientially. Lichtweg (Lightway), 1989–92, is a corridor of light installed in Munich’s International Airport along a thousand-meter walkway of moving sidewalks, which transport viewers through the piece. In 2018, Long Island’s Parrish Museum opened the artist’s first US solo exhibition in thirty-five years, Keith Sonnier: Until Today, which traveled the following year to the New Orleans Museum of Art. Earlier this year, Kasmin Gallery exhibited Keith Sonnier: Louisiana Suite, an installation of recent works in the Ba-O-Ba series. In 2022, Dia Art Foundation will open a solo exhibition of Sonnier’s works from the 60s and 70s alongside a room-sized installation of his multimedia environment Dis-Play II. Emily Llamazales is an Atlanta-based artist and the Program Assistant at Burnaway. 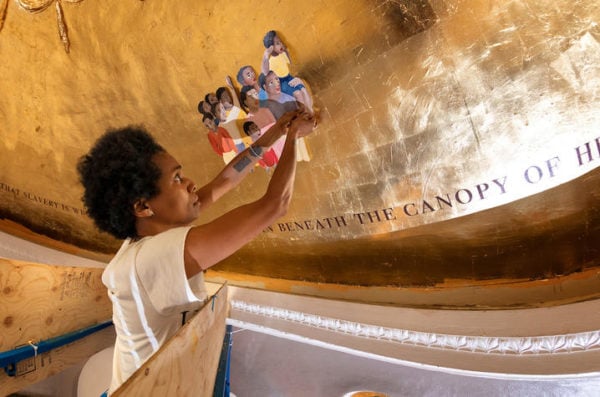