Atlanta-based artist Jane Foley is fascinated with posture. After finding an instruction manual for ocean swimming, she embarked on making a new body of work re-creating renditions of visual narratives in the book. Thumbnail images of two staged bodies, one performing as the person drowning and the other as the rescuer, are interspersed throughout the text. Foley’s interest in the movement and body language implied in these images inspired a more extended investigation of themes of weight, heaviness, and lightness. In her exhibition “Life Saving and Water Safety,” opening November 1 at Day & Night Projects, Foley presents this experimental work, which brings together elements of video, photography, and sculpture.

While based in Atlanta for most of the year, Garver is currently pursuing a degree in the low-residency MFA program at the School of the Art Institute of Chicago. We recently met to discuss her experiences with artist residencies, how and why she transforms various pool floaties into concrete sculptures, and her upcoming show at Day & Night Projects.

Anna Nelson-Daniel: You’ve shown work widely—in Atlanta with organizations such as FLUX Projects, WonderRoot, and Dashboard, and internationally in countries including Iceland, Morocco, and Chile. How do you balance living in Atlanta (or Chicago) with showing in international contexts?

Jane Foley:  I tend to keep really busy and work freelance. I just started grad school this summer so everything is different from how it has been [in the past]. For years I was building theater sets and doing some art handling to pay the bills, and also teaching a class at Georgia State. All of that was somewhat structured but also intentionally flexible so I could apply for residencies. I’ve focused my research on ones that are project-based, particularly in Europe. They usually bring you over for a period of time to devise something for a show at the end of it. That’s how a lot of these residencies work, as opposed to a more freeform setup. That way you have the time to formulate, then you have the time for a project at the end.

I went on my first residency in 2012, to Hambidge, as part of Leap Year. That was really eye-opening. At the end of the first week, I had already finished everything I thought I could do in two weeks. It was mind-blowing how much work I could make given a concentrated period of time. It punctuates the year, having an intense art-making period.

AND: How have these residencies influenced your studio practice in terms of process?

JF: Going on these residencies really influenced how I work in my studio back at home. When you go and devise a project while you’re participating in residencies, that provides a framework and then you fill that in from there, so that became something I wanted to make space for each year: applying for grants to do project-based residencies.

I did that over the last four years and it’s been amazing. I work really well with that model. It was kind of like a self-made graduate program. I wanted to go places, learn things, and dive into certain subject matter, and this was one way to do that, which I still really enjoy. Now I’m in grad school at Art Institute of Chicago, and even though I’m going to classes, it’s still that intensive period of art-making punctuating the year.

In Atlanta, where arts funding has been a struggle, I think artists don’t realize resources are available to them elsewhere. I’m often asked how I get these fully funded residencies. These programs take applications from all different kinds of artists, and the resources are already there. You just apply for them. Sure, there may be a bunch of applicants, but there are also a bunch of these residencies, and they’re better funded elsewhere than in the US. The first residency that I got that was really well-funded was called Sound Development, based out of Zurich. Everything they did was about supporting experimental sound artists.

AND:  What can you share about the work in your upcoming exhibition at Day & Night Projects?

JF: The videos are based on choreographic forms from this water safety book called Life Saving and Water Safety, which is where the exhibition gets its title. It’s a very ubiquitous book; it was a standard-issue Red Cross book for people learning how to do different holds in open water. I thought the figures in the book were extremely beautiful. Looking at the book, I was interested in this poetic ambiguity of how you can’t tell who is helping who. They look like lovers. There’s also this strangeness in how there’s someone wearing clothes. There’s this unconscious feeling that you know the person shouldn’t be in the water. As soon as you put on clothes in the water, it’s not a sport anymore, and I liked how out of place that is.

I was interested in some kind of gender ambiguity as well. I showed a version of this to people in my class in Chicago, and most people read it as a male-and-female couple, where the intention was for it to be read as two men. That’s the narrative of the book, but I also wouldn’t choose a hetero couple for my intended narrative, because it doesn’t feel as close to what I want to talk about. It’s interesting that people automatically assign gender to these figures when you really, really can’t tell. I tend to think of this piece as a documentation of a performance as opposed to a video that just wants to be a video. There’s definitely a translation at each step. Video is not usually one of my primary mediums, but it has been more so in the last year. This video will be projected alongside a print, and I will also show some larger versions of concrete casts of inflatables. I’m interested in making postures out of these palm trees and other inflatable things; I’m interested in their bowing postures.

AND: As I walked in, I noticed the steel pink palm tree sculpture of yours that was on view at Atlanta Contemporary last year. Will your new sculptures be along the same lines, creating similar palm tree forms?

JF: I’ve been making these for about a year now and have referred to them as “Sad Lamps.” I’m interested in taking something that was useful in one way and then using that in another way, as a container, as a mold to cast into. Then you put a light on it, and it becomes a lamp. It’s a process of imbuing features that are both human and non-human onto a series of objects.

Grad school has given me space to, instead of pursuing one-off projects, go further in iterating or exploring things in other ways. I don’t usually make multiples of something, but I’m trying to do that with these concrete sculptures. I want to make several similar sculptures that have subtle differences in their posture: the way everything is drooping or not, half-mast or not.

Concrete is a material that you have to work with really quickly, and you have to be careful about your mixing ratio. It has a material framework that you have to use. I originally tried concrete because I liked the look of it. If I wanted to make a perfect reproduction, I could, but that feels like a closed circuit. Now, it sort of fights back.

What I use is literally a six-dollar bag of concrete from Home Depot meant for dads installing basketball hoops. I like how cheap the material is. In bronze, this piece would be such a different kind of memorial. It looks heavy. I was interested in that strangeness in the weight of it. All of this work, whether video or sculpture, is about gesture and posture, weight and holding.

Jane Foley’s exhibition “Life Saving and Water Safety” opens at Day & Night Projects in Atlanta on November 1 and will remain on view through November 24. Anna Nelson-Daniel is an artist and writer based in Atlanta, Georgia. She earned a Master's degree in Fine Art from Chelsea College of Art (London, 2014) and a Bachelor's degree in Art History/ Visual Arts from Emory University (Atlanta, 2012). Her writing has appeared in Art Papers, Glasstire, and ArtsATL. 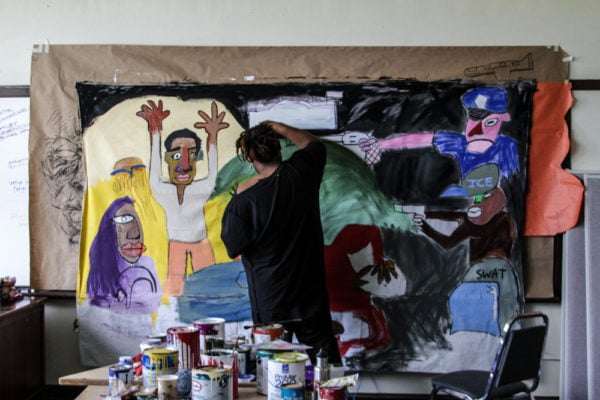