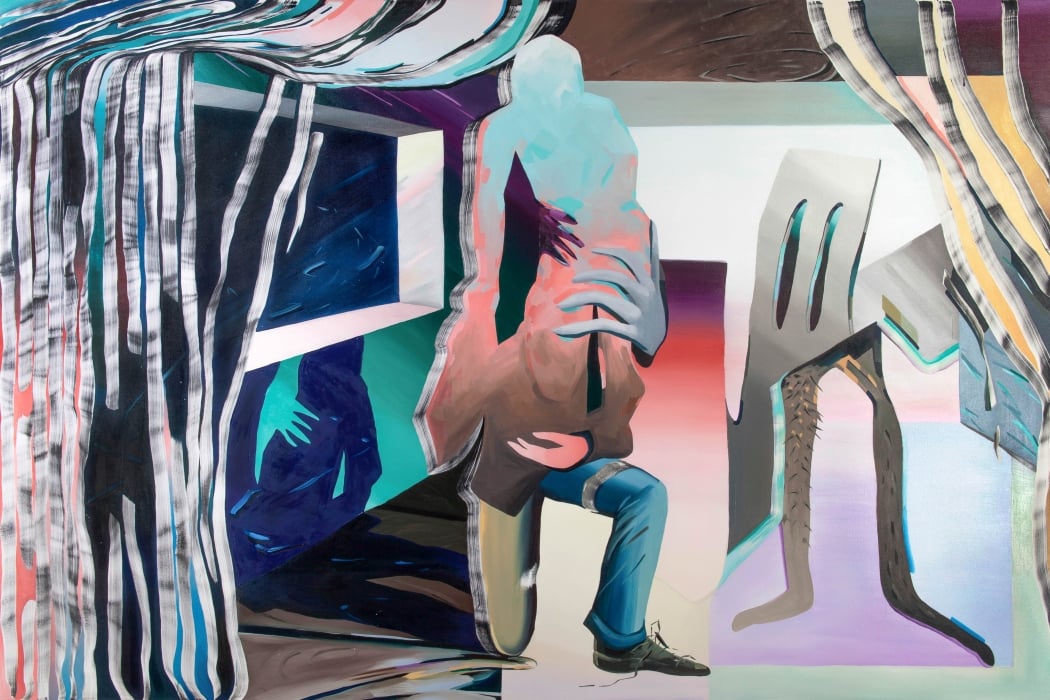 This month, through February 24, Nashville’s Zeitgeist Gallery premiered “Sentinels: Karen Seapker,” a high-key exhibition of monolithic paintings that ruminate on temporality. Seapker, a Nashville-based artist and Hunter College alum, is best known for her interstitial and medium-specific paintings. “Sentinels” is a continuation of Seapker’s hyper-stylized investigation into the nature of paint, yet marks a significant evolution of her practice—one that is adamantly figurative, female, and indulgent in the illusionary ability of a brushstroke.

I sat down with Seapker in her studio to discuss these new works.

Audrey Molloy: One of the first things that struck me about the new work in “Sentinels” is that you’ve employed this internal framing device. Your images don’t necessarily recede into the picture plane but seem to consciously reside inside of these secondary, interior frames. Now, I am seeing this inclusion of other smaller framing devices which pushes a spatiality I think you have been negotiating since early on.

Karen Seapker: This body of work considers the last several years of my life, a time that has slowed me down and held me inside of a space. In that time that I have become a mother and been caring for my two daughters. I’ve found myself feeling more home-bound, tethered, and domesticated than I have ever before.  Not just within my house but specifically in my daughters’ room, in our chair, rocking back and forth. The stillness and interiority from these experiences has definitely entered into these paintings, which feel almost hyper-present and aware of their state of presentation.

At the same time, while my experience of motherhood has stilled me in some ways, it’s also presented opportunities for connecting with mothers across cultures and across history.  While rocking in my chair—mostly nursing—I’ll often find my mind wandering across space and time, thinking about other experiences of motherhood, thinking about what’s happening in the world, thinking about what my responsibilities are as a mother, as a witness—in these ways traveling space and time. So I wanted the spaces in these paintings, though feeling contained and interior, to also suggest planes shifting, teasing the possibility of opening up or looking outside, or simultaneously being here and there.

That dimensionality—those shifting planes that you refer to—also seems relative to your inclusion of both highly abstract and representational elements in your work. What is your thinking behind that?

It’s funny; I can be such a big geek about all of the painterly possibilities in, around, and between abstraction and representation. When I went to grad school, one of the artists who was really hot for a while was Neo Rauch. I went to   so I got to see a lot of his work, and—not that he was the first—but Neo Rauch would work so directly and forthrightly with such a sense of play—putting a cartoonish blob of paint right next to a rendered mythological figure.

After seeing that I thought, Okay, anything is possible. And that’s a lot to digest! So I have had to actually figure out my own logic—it was almost too overwhelming, this idea that you can do anything with painting. But in the logic that I have used, probably for a decade now, I think about the canvas as a space to contemplate time and movement. And of course, that’s inseparable from space, which makes it ideal for something to play with in painting.

I still love the idea that painting can provide a sense of illusion—which allows for a transportation out of yourself—but also can be overtly present; pure material. For a while I was really working that out in my paintings—turning around assumptions and definitions of abstraction and representation onto one another, reversing their roles, and conflating their identities to figure out what would come out on the other end.  I needed to work it all out for myself.  None of that thinking is really used now, but I feel like all of that work and play have almost been inherited in the DNA of my mark-making, and how I allow myself the permission to make marks.

For example, I consider all of my marks as figurative. The slow drag that you see in these [new works] arrived after my first daughter was born. There is nothing overtly figurative about it, but the way that it behaves mimics the way a body might. It recalls my gesture, my hand, it is connected to me. The slow dragged marks were, for me, a revelation as a way of marking something that reflected the pace of my life. They had a grace and an awareness of presence but also fumbled their ways within and around the picture plane. They felt figurative and wanting to hold themselves, or suggested being held, and beheld. At the same time, it was so easy to see them as simple, dumb, obvious, singular, brush strokes.

Absolutely, you have essentially constructed your own lexicon in which to converse among these mark-making styles.

Right. And I do think some of these marks still connote a sense of passage. Like in Sibyl (2017), this is a way of moving paint around which I discovered after a loss in my family when I was thinking about the irreversibility of time. When I had used these marks in paintings initially, they were made from looking at photographs that I had taken through a window while in transit. Those marks were almost romantically fleeting and lush and green, but now, in these works, there’s that sense of remove with them—marking a distance from that loss.

I am really interested in the moments where you have taken a form which would otherwise “complete” a figure but you’ve employed these temporally inclined painterly marks to recede or abstract the form. Like in Congregate (2016), the left side of the two figures’ embrace is bordered in this slow drag of paint which visually constructs a sense of dimension, but also highlights the total flatness of the two figures. There is this great sense of fallacy underlined here—a kind of remove from the hyperreality of the brushstroke.

Exactly. That is really important to me, this honest suspension of disbelief that I am asking my viewers to give. I remember when I was in college, I took a theater course and my professor was talking about how in the play “Peter Pan” everybody can see the strings as she flies across the stage, but because they see the means of the artifice, and know that they aren’t being tricked, they are willing to look right past it and enjoy the excitement of the magic. And then when they say, “Clap if you believe in fairies!” everyone knows that it’s just this little bulb in a jar, but everyone claps! They can see all the falseness but then they agree to participate, I will do that, I’ll play.  I love that. I aim for that honesty, that obviousness, the obvious facture of paint.

One of the considerations I always make when I’m looking at someone’s work is what it could look like or be in a different medium, but your work is so completely about paint.

I tell my students all the time: whenever you have a great idea, what you then have to contend with is why is that a painting? What are the qualities intrinsic in painting that can enhance that content? There are so many things that paint can do. I remember when I first became really interested in time, my friends were like you’re going to start doing film now? But I love the challenge that I have to deal with time on this stagnant, still, surface.

And within this mark-making language that you’ve created, which directly deals with time aesthetically and dialectically, you’ve investigated the temporal constraints of paint as it appears on the canvas but also in a manner which, like language, denotes complexity over time.

Well initially, when I first started working this way, people just saw weather systems and storms. When I was introducing the more elemental brush strokes people just saw the movement, but I think I’ve learned to counter that a bit.

I also feel like one of the things I’ve learned over recent years is that you can get away with expressive brush strokes when you have geometry, or when you couch  them within precision or flatness. Gestural brushwork has such baggage! It’s funny, people speak about Abstract Expressionism as related to machismo, and, for good reason, speak about Ab-Ex in a derogatory manner in how it relates to ego and “feelings.”  But a gesture can be so much more than that.  And I especially resent the baggage of the emotionally coded Ab-Ex gesture when conflated with socialized gender norms and that my marks might purely and solely represent my feminine “feelings.”  I reject that reduction.  A mark can carry emotion, be delivered with skilled execution, be based in reason and logic all at the same time, and can maybe even have a sense of humor to boot.

About your use of color in these new works—there is a sense of it being incredibly artificial at times. Is this intentional?

Yeah, I like the way that it pulls the viewer into this sense of a hyper-reality. It’s not trying to be of this world, they’re not in this world, they’re their own thing. The colors make obvious the painting’s plasticity and artificiality and highlight the obviousness of manufacture. The color also feels playful; there’s always been a part of me which gives myself the permission to let my paintings teeter toward play and the fictional world of cartoon. I permit myself to do that because I know the underbelly is so … heavy. The colors take it out of that realm.

I’ve also started to think about color as another way of generating pace, which relates to time. Whether something moves through a gradient in a way that feels quick or feels slow, or when you put one color next to another, I almost get this clicking contrast which moves so fast as opposed to something else which moves slower and more easily. Almost like choreography I suppose, in terms of positioning the paint to achieve a visual tempo. I’m choreographing a visual experience.

This new work in “Sentinels” seems to mark an evolution toward specific representational objects and figures. What guides those choices?

Considering both our political climate as well as personal reasons, I felt the need to both surround myself with and honor powerful female figures. These figures have been guiding forces for me in the past year, and I’ve felt empowered in their company. The paintings have been places where I am able to focus on balance and resolve and harmoniousness in what has felt like destabilizing times.

Motherhood has been a role in my life that has made me feel so strong, and these maternal figures exude and celebrate that strength. They are tough and complex and tangled compositions and these female figures can bear it all. These figures are on guard with me, my fellow sentinels.

By going epic with these figures, I’ve had to be very strategic in terms of my inclusion of different elements and what they represent. I want the figures to feel otherworldly but also of this world. The idea of the phone in the charger in Bearing (2017), that’s very literal. It’s just beside my living room window. The Nike sneaker is an incredibly realistic element, whereas the figure is referentially art historical. I’ve been trying to figure out how I tether these paintings to right now. I need these to be grounded in today.

“Sentinels” is on view at Zeigeist Gallery in Nashville through February 24.

Audrey Molloy is an arts writer currently living in Nashville. 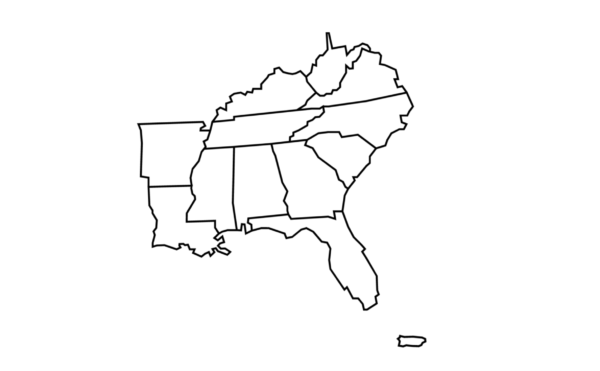 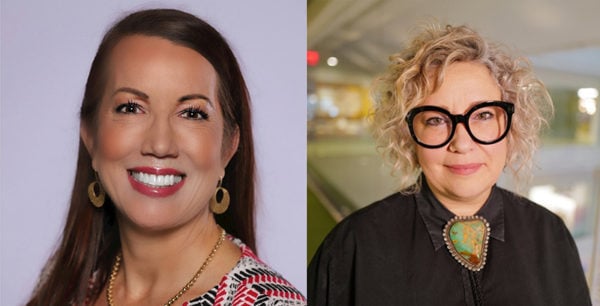