Burnaway > News > In His New Video, Lonnie Holley Wakes Up in an Effed-up America

In His New Video, Lonnie Holley Wakes Up in an Effed-up America 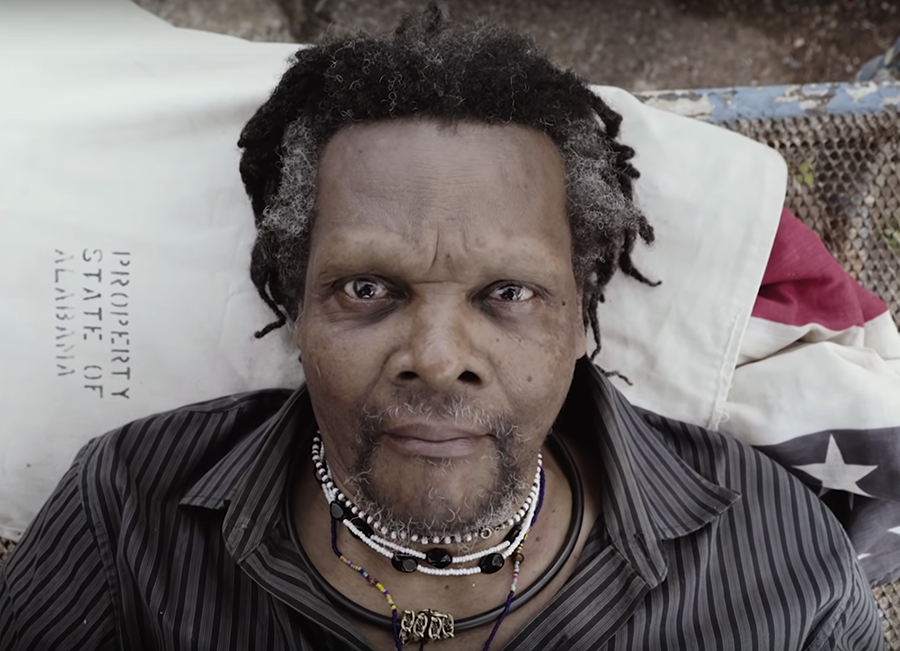 Lonnie Holley has long been known for his bric-a-brac wall works and sculptures, some of which now reside at the Metropolitan Museum of Art in New York. The Alabama-born Atlanta resident is increasingly recognized for his music, a discipline in which he is also self-taught. His soulful performances and recordings can be as spontaneous as his art-making. He often performs at Eddie’s Attic in Decatur, at music festivals and at his exhibitions. His first professional recordings were in 2006, and a 2010 performance at Grocery on Home led to his signing with the record label Dust-to-Digital, which produced “Just Before Music” in 2012 and “Keeping a Record of It” in 2013. The latter made critics’ lists of top recordings in 2013, including those at The Washington Post and the Chicago Sun-Times.

Last week, Holley released a new music video on YouTube called I Woke Up in a Fucked-Up America in advance of the September 21 release of his third album, “MITH.” In theme and aesthetic, it is akin to Childish Gambino’s gut-punch of a video This is America. Both are searing indictments of the current social and political climate.

In I Woke Up… , which is directed by Matt Arnett and Ethan Payne, Holley repeatedly wakes up, as if it’s Groundhog’s Day, though he always remains in bed. It’s the bed that travels, appearing in his Atlanta studio, Thornton Dial’s studio, Joe Minter’s environment, an African-American cemetery in Birmingham where many of his family members are buried, and the location of his former outdoor environment that was notoriously razed by the city of Birmingham to make way for an airport expansion.

In each setting, the camera pans his surroundings continuously. Viewers familiar with his work will recognize finished pieces — wire silhouettes, the Statue of Liberty in a bird cage, among many others — and materials gathered by the artist for future artworks are on hand, as well as the works of some 20 other artists, including Joe Minter, Thornton Dial, Purvis Young, Ronald Lockett, Mary T. Smith, Mose Tolliver, and Jimmie Lee Sudduth. Against this backdrop, drummer Marlon Patton and trombonist Dave Nelson add ominous and discordant tones. The video ends with Holley’s plea “let me out of this dream.”

Like ghosts from his past, various people make brief bedside appearances, including the artist Joe Minter and his wife Hilda; Richard and Dan Dial, sons of the late Thornton Dial; and Bill Arnett, founder of the Souls Grown Deep Foundation who began collecting pieces by Holley, Minter, Dial and others in rural Alabama, assembling the largest collection of self-taught art in the U.S. Over the past few years, portions of that collection have been dispersed to various museums around the country.

The new video is a sadly appropriate follow-up to Holley 2016 non-music get-out-the-vote video In the Grip of Power.

In 2013, Holley toured the West Coast with Deerhunter, the East Coast with Bill Callahan, and his first tour through Western Europe. Holley has been joined on stage by a variety of musicians, including Georgia musician Marshall Ruffin and members of Deerhunter, Black Lips, The War on Drugs, and many others.

There’s more Lonnie to come. Atlanta-based filmmaker George King is putting the finishing touches on his documentary of Holley that’s been over 20 years in the making. No word on a release date at this time.