Burnaway > Features > Memorial Drive: The Impact and Context of the Orly Plane Crash

Memorial Drive: The Impact and Context of the Orly Plane Crash

Memorial Drive is a collaborative series by BURNAWAY and ArtsCriticATL about the history of the arts in Atlanta.

June 3, 2012, will mark the fiftieth anniversary of the doomed Air France Flight 007 in which 106 of Atlanta’s leading arts patrons died at Orly Airport. Only two people out of 132 would walk away from that crash. It was the worst air disaster in history to that point. The impact of this tragedy on Atlanta was enormous.

I’m certainly not the first to write about this region-wide historical trauma. In spite of the abundance of coverage, I came upon the tale in a manner similar to how one learns old ghost stories: in hushed tones and put forward to explain an odd facet of communal life. During a conversation with someone from one of Atlanta’s leading arts organizations, I asked what they thought our communities needed, and, for them, the Orly crash served as the genesis of Atlanta’s contemporary arts scenes.

The accident left 31 children orphaned, and the broader metro area continues to grapple with this tragedy today. Rather than detail the crash itself—I can recommend Ann Uhry Abrams’s book Explosion at Orly: The Disaster that Transformed Atlanta or GPB’s documentary The Day Atlanta Stood Still—I’d like to situate some of the broader context of that summer in 1962.

The most obvious result of the Orly explosion is the creation of the Atlanta Memorial Arts Center, renamed the Woodruff Arts Center in 1982. Robert W. Woodruff, the Coca-Cola magnate and future namesake of the enormous cultural center on Peachtree Street, was initially guided by the head of his foundation and former president of Oglethorpe University, Dr. Philip Weltner, to build an arts complex in Piedmont Park. This would have been a natural choice at the time because Piedmont Park had become the site of the annual Arts Festival.

The plan to finance the building of this cultural center, however, failed to pass a public referendum in August of 1962, in no small part due to the charged racial atmosphere. There were two reasons for this failed referendum. First, the strongest link between the Atlanta Arts Alliance and the city’s Cultural Needs Committee, Del Paige, had died in the wreckage at Orly. Second, Woodruff insisted on donating the initial $4 million anonymously. The white power structure of the time allowed a whisper campaign suggesting that the mysterious donor was actually the family of millionaire Alonzo Herndon, a “negro” family.

Although Mayor William Hartsfield often said that he lived in the “city too busy to hate,” Atlanta in 1962 was no stranger to hate-fueled violence. In October, 1958, the city’s oldest Reform Jewish school, The Temple, was torn apart by 41 sticks of dynamite. The Hebrew Benevolent Congregation Temple, commonly called simply the Temple, was led by Rabbi Jacob Rothchild, an outspoken proponent for civil rights and personal friend of Martin Luther King, Jr.

In a warning call before the explosion, “General Gordon of the Confederate Underground” told the press: “We bombed a temple in Atlanta. This is the last empty building in Atlanta we will bomb. All nightclubs refusing to fire their Negro employees will also be blown up …. Negroes and Jews are hereby declared aliens.”

Two years after the bombing of the Temple, Martin Luther King, Jr., would spend his first night in jail for refusing to pay a $500 bond after he was arrested with his colleagues for engaging in a sit-in at Rich’s Magnolia Room.

Two years later brought the Orly crash. The Atlanta Arts Association, which had organized a tour of Western Europe that would end in the deaths of Atlanta’s leading arts patrons, was in hysterics in the wake of this grave tragedy. Telegrams came from around the world—from Pope John XXIII, Charles de Gaulle, German Chancellor Konrad Adenauer—many of these forwarded from the White House itself. The Kennedy family and Martin Luther King, Jr., also sent their condolences.

King’s personal confidante and long-time friend, Harry Belafonte, had just performed for John F. Kennedy, Jr., with Miriam Makeba, but their performance has been overshadowed in the subsequent years by Marilyn Monroe’s rendition of “Happy Birthday.” Belafonte and Makeba, while in Atlanta for an SCLC benefit during the devastating events at Orly, had been denied service at the King’s Inn Restaurant even though the city was officially integrated. King and the SCLC issued a statement stating that, in ordinary circumstances, they would have asked SCLC members and supporters to stage a sit-in at the King’s Inn. But, because the incident happened just weeks after that fatal plane crash killed 106 arts patrons (many close friends of Mayor Ivan Allen), this act of nonviolent civil disobedience would be postponed until “a more propitious time” (as documented in Rebecca Burns’s Burial for a King).

The deaths in the wreckage at Orly were also a significant moment for two seemingly totally unrelated figures: Malcolm X and Andy Warhol.

Having flown to Los Angeles from Harlem, Malcolm X made national attention for his comments about the Orly crash (Taylor Branch describes the events in Pillar of Fire). He had helped establish the Nation of Islam Mosque in L.A. in the later part of the 1950s, and it was here he returned in June of 1962 because of the trial of Donald Weese for the fatal shooting of Ronald Stokes that also left William Rogers paralyzed. Malcolm X was irate—as many were in black communities throughout the U.S.—that Officer Weese, after admitting in court that he shot a man whom he knew to be both unarmed and begging not to be shot, had been acquitted by an all-white jury.

Arriving in Los Angeles with an eye to exacting revenge, Malcolm X announced his position at a rally protesting the Stokes case: “Many people have been asking, ‘Well, what are you going to do?’ And since we know that the man is tracking us down day by day to try and find out what we are going to do, so he’ll have some excuse to put us behind his bars, we call on our God. He gets rid of 120 of them in one whop … and we hope that every day another plane falls out of the sky.”

When Martin Luther King, Jr., was asked about what it means for the Civil Rights Movement that Malcolm X would seemingly find joy in this extreme tragedy, he skillfully said, “If the Muslim leader said that, I would certainly disagree with him.” It should be pointed out, to be fair to Malcolm X, that the Weese trial was a turning point, and some close to him would later state that this episode served as an impetus for his leaving the Nation of Islam. Only a few short years later, he also admitted that he was not only wrong, but also had acted with “sickness and madness” in the years prior to 1965, and that he had “lived to regret that incident.”

It was against this backdrop that Andy Warhol found an image of the Orly disaster on the front page of the New York Mirror. This image was the basis for Warhol’s 129 Die in Jet (Plane Crash), and it was the cataclysmic loss of Atlanta’s most active arts patrons that launched Warhol’s Death and Disaster paintings (in 2007, his Green Car Crash III would fetch $71.7 million at Christie’s auction).

Contemporary Swiss artist Thomas Hirschorn, who exhibited at the Swiss Pavillion at this year’s Venice Biennale, stated in the pages of ART FORUM that it was viewing Warhol’s 129 Die in Jet in 1978 that made him aware that he needed to be an artist. “It was the first time in my life that art had an impact on me, the first time I was directly in dialogue with it,” he said. “129 Die in Jet changed my life.”

As has been pointed out over the last decade, the presence of the Woodruff Arts Center in Atlanta has greatly impacted the arts overall in Atlanta. The Woodruff Arts Center has a budget that doesn’t simply dwarf the majority of other arts organizations in the metro area; its scale stands at an order of magnitude in difference. To some extent, this is the result of the outpouring of generosity from across the nation in the wake of the Orly disaster. The first time any images of the High Museum’s collection were published in print was in an article for Life magazine that reported the significant loss to Atlanta’s cultural life. Several foundations that continue to generously support the Atlanta arts communities are named after patrons lost in the explosion, including the Vasser Wooley Foundation and the Thomas H. Lanier Foundation. Even the Forward Arts Foundation’s Emerging Artist Award can be seen as a response to the events of June, 1962.

Conversations about Atlanta’s arts community tend to vacillate between lamentations that local artists and institutions don’t receive enough attention and, on the other side of the spectrum, accusations that Atlanta is insular, that we actively cultivate an echo chamber promoting ourselves to ourselves. There’s no question that the city continues to evaluate the tremendous loss of life at Orly, but the history also highlights the significant impact that Atlanta’s arts community has achieved. As we enter a season of family celebration this winter, I hope that we, collectively, can reflect on the significant changes that the last 50 years have presented.

Putting a fresh spin on the old phrase “memory lane,” Memorial Drive also honors its namesake, the long road running from downtown Atlanta to Stone Mountain, Georgia, passing in front of Oakland Cemetery and the old stomping grounds of Martin Luther King, Jr., nearby. The series explores the theme of memory, holding that, in order to move forward, we also need to look back.

This is the final installment of the series! We invite readers to read back through, comment, and offer ideas for further topics.
— Jeremy Abernathy and Catherine Fox 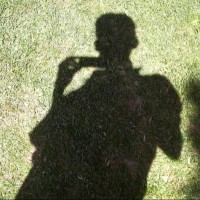