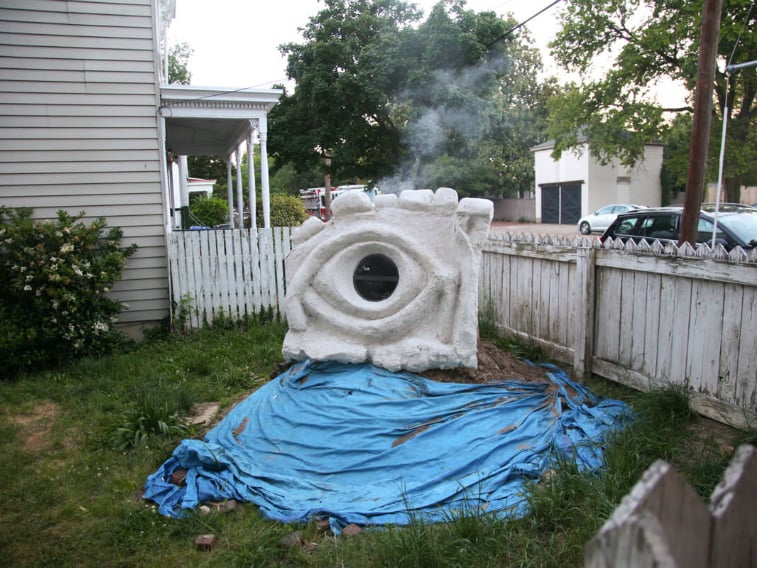 Why did you decide to open The Sunroom?

We talked about opening a space one of the first times we met, when we were both relocating to Richmond for the graduate program in sculpture and extended media at VCU. I think there was some mystery and excitement in making a commitment to a new friend that made us really push ourselves. We brought different ideas and interests to the table but shared the goal of putting artists from our former communities in conversation with the artists we’ve meet in Richmond. We both wanted to run a space that serves more as a platform to support other artists, rather than push forward a specific thesis or curatorial agenda with each show.

What has most surprised you about the experience of operating an artist-run space?

The initial momentum we had in organizing our first show came with a lot of setbacks in terms of establishing the physical space. The week before the opening, the facade began peeling away from the building and bricks were falling onto the street. The landlord had to cut a massive hole in the ceiling and offered to let us use a small house on his property instead. When we went out to visit, it ended up being on his hay farm, where he collected albino peacocks and old horse-drawn hearses. We were intrigued, but the whole thing was so complicated that we ended up rearranging our dining room and having the first show in there instead. Overall, there are so many people who come into your life when you’re running a space like this. I think our initial focus was on the relationships we would form with artists and peers in Richmond, but we’ve ended up forming interesting relationships with many other figures in our community—small local businesses, neighbors,  and people who see flyers in the coffee shop or have reached out through our website to schedule a visit.

What other artist-run spaces in the South and beyond are currently on your radar?

Richmond has a few other interesting artist-run spaces, including Sediment and Valet. Valet is operated by a collective of artists, many of whom went through the VCU art program. They accept proposals and put on a variety of shows ranging from one-night performances to month-long exhibitions. Other spaces that have been on our radar include Species (Atlanta), Good Enough (Atlanta), Tops (Memphis), Camayuhs (Atlanta) and Good Weather (Little Rock).

If you couldn’t run a gallery but could still organize an artist-run project, what would it be? (An ice cream truck? A bookshop? A barbecue?)

We’ve been interested in making specific props and support structures for the larger theater of people and artworks that unfolds in an exhibition. We made a bench for “Cosplay at the Family Dinner,” which was part of the impetus for the project, and we have a show in the works this spring for which we plan make a tent that will host a group of artists in the Shenandoah mountains. Since it’s not our intention to function as a commercial gallery, we’ve been thinking about the props as a way to twist or hyperbolize our dual roles as artists and facilitators of the space. Additionally, we’ve been making editioned artworks to accompany many of the shows, including prints, books and CDs. This has given us another way to work with artists and creates a platform for the work to reach beyond the duration of the exhibition.

A performance by artist N-Prolenta, part of their exhibition curated by The Sunroom, is scheduled for Saturday, September 8 at 1 pm at Atlanta Contemporary. “Robyn,” a collaboration between Hunter and Donovan, opens on Sunday, September 9 at the new location of Good Enough in suburban Atlanta.