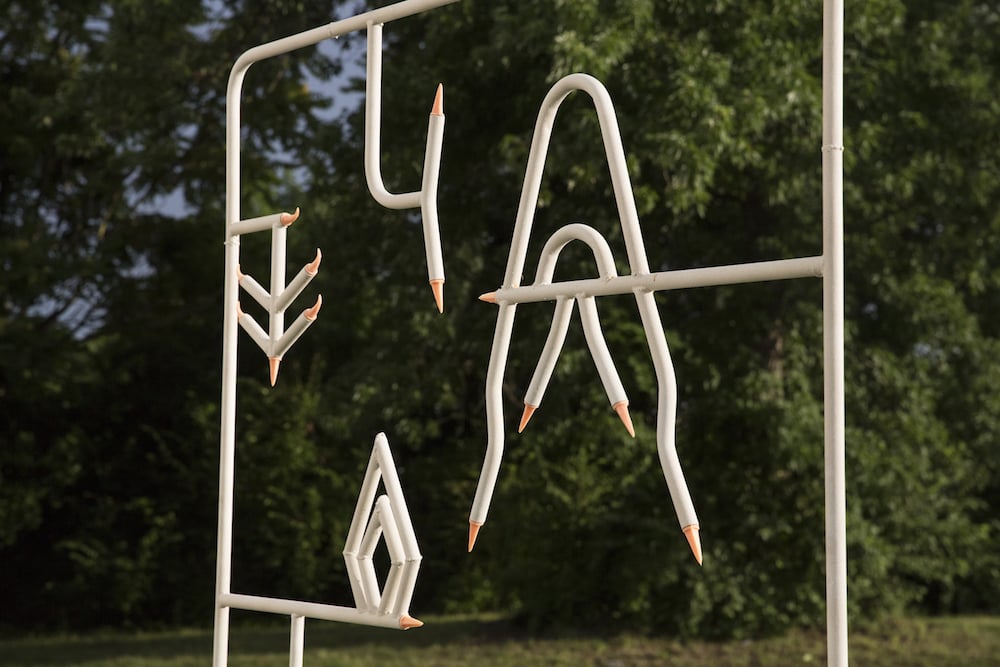 Artist-run spaces have received a lot of attention lately and are starting to be taken more seriously by artists, gallerists, and collectors. Have you seen that reflected in Tennessee in general or in your experiences running Mild Climate?

The most gratifying aspect of Mild Climate has been developing relationships with established artists and being able to bring that work to our tiny space in Nashville. One special moment in particular was Yevgeniya Baras, inviting us into her studio, making us espresso, and then allowing us to drive her paintings fifteen hours in the trunk of a rental car to Tennessee. It was validating and exciting and really felt like we were doing something special. When places like Georgia State University and University of Georgia allow us to curate shows in their galleries, and include us in events like the Fire on the Horizon panel at RISD organized by Lee Pivnick—institutions can help fund and legitimize our work. That was important to our growth as a space. I hope that more spaces can get those kinds of opportunities as well, and I think the interest in artist-run spaces is well deserved and important. It is critical for spaces existing in the South and outside of New York, Los Angeles, and Chicago.

Mild Climate has been on a hiatus since late 2018. Can you explain that and if there are plans to reopen or any additional plans for the future?

Right now, we are dormant and re-configuring as two of our members have moved to New York. We are trying to figure out the next steps or form (if any) that Mild Climate will take. As of today we are focusing on our own artistic practices and curatorial endeavors, but Mild Climate is never far from our minds. I hold all of the relationships we have formed through the space close to my heart and, being in New York, I’ve had the opportunity to see a lot of the shows and projects from artists I met in person happen here (and it’s just so wonderful). Whatever form Mild Climate ends up taking, I’m excited for the next chapter. Our archive will always be available on our site as well.

We have an upcoming collaboration with New Era Digestible (Saige Rowe and Carbon Anderson) called Gravity Song. It will take place at the historic Fort Negley in Nashville on July 25. This has been a timely collaboration, as Mild Climate is thinking more about unconventional spaces for artists to exist in and around. Gravity Song ephemerally connects artists working in text and performance, and splits into two—a wearable garment of poetry and an on-site installation and performance via Mild Climate in Nashville, TN. The onsite performance and installation will include Maya Martinez, Marcyanne Hanneman, Frankie Baker, Jean Langkau and Emily Wang.

In researching this site, we became aware of the fraught and complex history of Fort Negley, a Civil War-era Union fort built by conscript labor from former slaves. Abandoned for years, it has recently been proposed for rezoning. Over time it has been a site of civil action and is symbolic of the communities and culture that have been birthed through self-determination and struggle. We hope to occupy this space to find new points of reconciliation between its past and its future. David Onri Anderson is also curating shows solo in a small shed near his house aptly named The Electric Shed. Interstices opened on July 20 and features artists Nuveen Barwari, Matt Christy, Marlos E’van, Alex Kimball, Noël Morical, and Amy Pleasant.

The announcement of the first Tennessee Triennial in 2021 has brought new levels of attention to contemporary art in Tennesee. What would be a successful outcome of the triennial for you?

I’ve always thought there was a disconnect between art and non-artists in Nashville. Whether it’s a question of accessibility or just interest in contemporary art, I’m hoping that the triennial can bridge that gap and get locals excited for what’s happening there. A successful triennial would hopefully create an inclusive survey of Tennessee and the surrounding states.

Is there an artist run space in Nashville or Tennessee (or the South more broadly) that inspires Mild Climate or that you look to as a successful example? While there seem to be more artist-run spaces than ever, they’re also notoriously short-lived.

The Institute of Queer Ecology founded by Lee Pivnik, who’s currently based in Miami, Florida. It’s not a traditional brick and mortar “space” but it functions as an inclusive artist community focusing on broader questions of conservation, education, and appreciation for the ecology around us. The work that IQECO is doing is inspiring, and the community of artists and connections they are facilitating is beautiful and most important right now.

Good Enough in Atlanta, run by Steffen Sornpao and Jordan Spurlin, is not only an inspiration in terms of its amazing programming but also in the space’s ability to shape-shift. They have shown us such hospitality and have embraced us with open arms on multiple occasions. We need spaces like Good Enough in the South and always always will.