Unlike David Hockney’s vibrantly blue pools populated with tanned young flesh, Katherine Taylor‘s swimming pools exist in bleak, geometrically defined landscapes in an unhealthy haze, almost devoid of natural forms. A vague blush of pink or russet, violet or yellow, occasionally underlies the ominous billowing gray clouds. But this wan daylight seems to be coming to a brutally unlovely end in Spillover, a show of new paintings at the Museum of Contemporary Art of Georgia through January 18, 2014.

Taylor’s landscapes are essentially non-landscapes. We see indications of coastal causeways, construction sites, interchanges, and roadways that might have been built with the intention of allowing access to and enjoyment of the coast, but it instead looks like they’ve ruined it.

Taylor is a native of Biloxi, Mississippi, a coastal region greatly affected by development, Hurricane Katrina in 2005, and the massive 2010 oil spill in the Gulf of Mexico. The pools in these paintings have been symbolically drained of water and partially filled with something dark, unpleasant, and oily.

As it happens, Taylor often works with oil—oil paint, that is, a material that she uses masterfully in  large canvas works to capture the sheen of the metal rungs of a pool ladder, for example, or the texture of surging clouds above. But she achieves a sort of dark glory when it is used, self-reflexively, to depict petroleum itself. It’s an effect especially well done in several small works on linen where streaks and dabs of black and gray oil paint give the works a sickening, goopy sheen.

A number of acrylic on aluminum paintings highlight the thrusting geometric shapes of the pools     themselves—their Euclidean “ideal form” (ideal for collecting petrochemical residue, it turns out), their artifice, their depth, their slashing interruption of pure, cool space. Depicted at uncomfortably sharp angles, they seem poised to poke into our space and to spill their terrible contents. It’s an effect that works especially well in Aggregate Views, an installation of 26 small paintings of various shapes and sizes, in which the pool shape repeats at dizzying angles, but is less successful when it reaches its would-be climax: the monumental Grand Design Performing Landscape, created on site, which lacks the visual rhythm of the smaller series.

Although Taylor’s elegiac bleakness can start to feel one-note and familiar, her exhibition as a whole consists of serious, accomplished work. 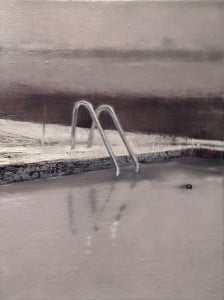 share Print
Related Stories
Oolite x BA
Writer Alexandra Martinez considers Franky Cruz's interpretation of the domes of Buckminster Fuller in Miami in this Oolite x BA feature.
Invasive Species
MJ Sanqui parses through the residue of human development in their review of NCMA's recent photography exhibition, The Altered Environment, curated by Maya Brooks
Letter from Jackson
Editor Jasmine Amussen recounts a spring in Mississippi and the waters that move thru us and the Legacies of the Great Migration at Mississippi Museum of Art.
Subscribe
to BurnawaySign up to recieve the Burnaway newsletter and get notified about upcoming events and opportunities.* required field